Alex Polizzi will need a lot of time to recover after apparently suffering a broken jaw in his third-round knockout loss to Yoel Romero at Bellator 280.

The light heavyweight prospect revealed the damage done from the fight on his Instagram, showing the X-ray he received following the bout earlier this month in Paris. 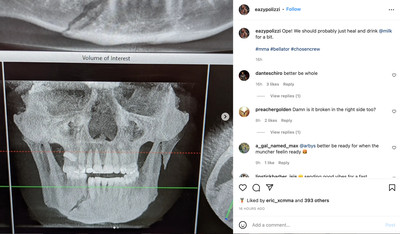 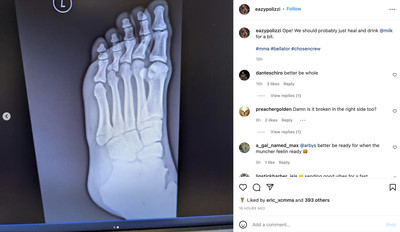 “Ope! We should probably just heal and drink milk for a bit!” Polizzi captioned the pictures of X-rays showing his jaw and injured foot.

Polizzi survived through two rounds with the ultra-dangerous Romero, who is well known for his explosive finishes. Unfortunately, he got caught in the third round with a knockout blow that ended the fight just one second before the final bell.

“I wanted to deliver a message, and I think I did,” Romero said about his win.

Prior to that loss, Polizzi had won three straight fights in Bellator. But now, he’ll have to build back after his battle with Romero. There’s no word on how long he’ll be sidelined; if broken, the jaw has to be reset, and he can’t take any more damage until healing is complete.

When he does come back, Polizzi will seek to return to the win column to build on his 10-2 overall record including a 4-2 resume in Bellator.