Carla Esparza explains why she’s willing to wait for a title shot; Dana White advises her against it 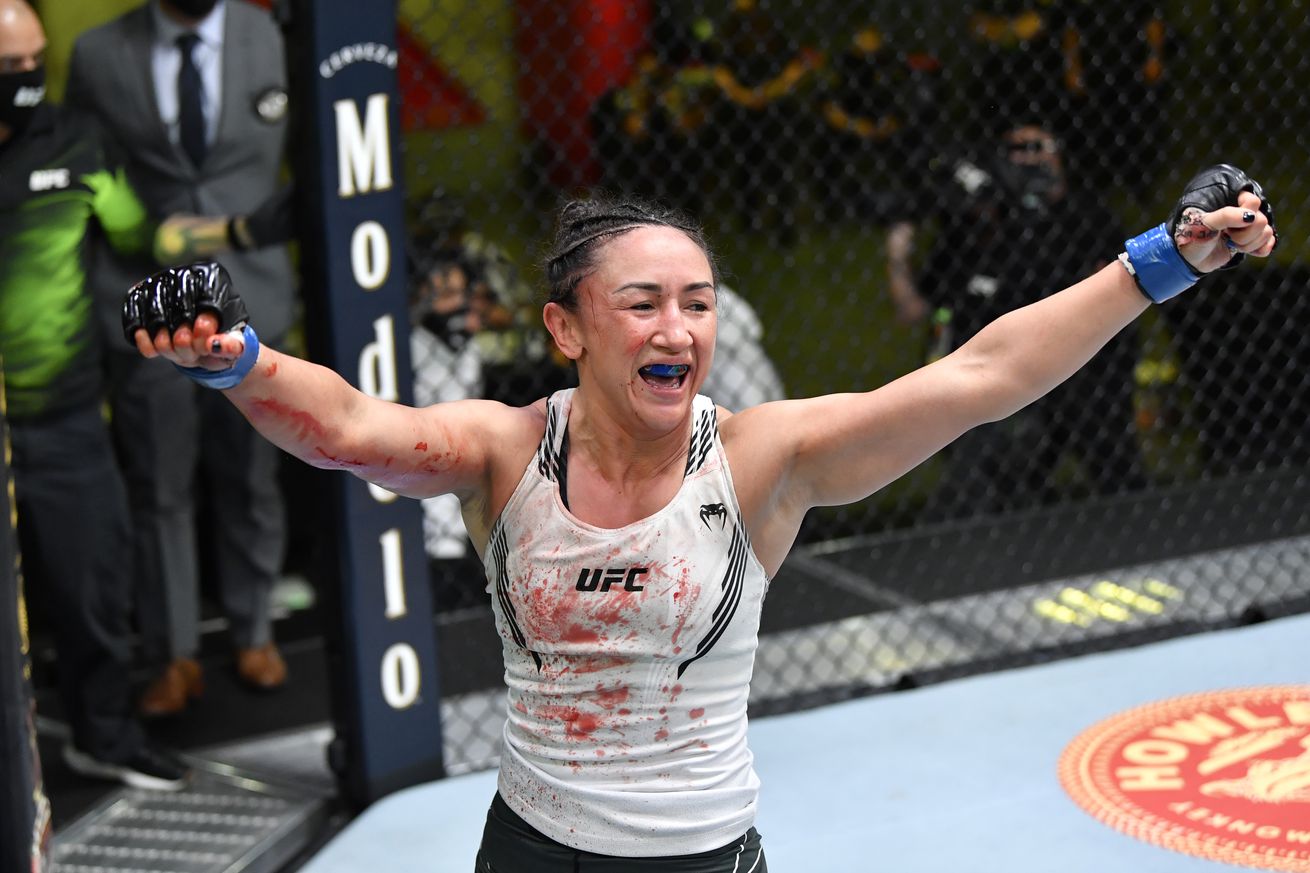 It was barely a week after Carla Esparza demolished Yan Xiaonan when she received a call that all but assured her she wasn’t going to receive the next shot at the strawweight title.

Despite five wins in a row including victories over Marina Rodriguez and Michelle Waterson, the former 115-pound champion was offered a fight against Mackenzie Dern later in the year. Now this came before the UFC had officially announced the strawweight title fight rematch between reigning champ Rose Namajunas and Zhang Weili but Esparza already started to see the writing on the wall that she was probably going to get passed over.

“They did offer me the Mackenzie [Dern] fight,” Esparza revealed when speaking to MMA Fighting. “I think that was within of like a week of me getting home from my last win.

“That was also an indicator that they weren’t going to for sure give me the title shot next. If they’re offering me fights now then they potentially don’t have me in mind for the next title fight.”

It was understandably disappointing for Esparza, who was crowned the UFC’s first ever strawweight champion back in 2014 with a third round submission against Namajunas.

Esparza believed her resume combined with the storyline that she earned her way back to a title fight — this time with Namajunas as the champion — would be enough to be awarded that opportunity.

When the UFC announced that Namajunas would face Zhang again at UFC 268, Esparza wasn’t necessarily shocked but it also didn’t cushion the blow that she wasn’t going to get a title shot.

“I can’t say that I was 100 percent surprised,” Esparza said. “I felt that was the fight to make. As soon as I won my fight, I expected them to say ‘all right you got the shot!’ Just waiting so long and not hearing anything, I kind of suspected that was a big possibility. I can’t say that I wasn’t bummed out.

“It’s obviously a huge opportunity that not only do I want but I felt that I deserved. I was bummed but just reflecting back, can’t really control what decision [the UFC] made, the best decision for the company. I’m sure they made that for the company’s best interests. I’m just hoping that I get the next one and I’ll sit and wait for so long and they pull something like this again. That would honestly be very upsetting.”

Right now, Esparza is planning her wedding in May and ideally if she was going to fight again, it would happen before that date but she doesn’t want to make any plans until at least after UFC 268 happens.

If Namajunas beats Zhang again, Esparza truly believes she will be next for the title but she doesn’t want to make any moves until that fight is finished.

“I definitely plan to wait for the winner of that fight and kind of see what shakes up at that point,” Esparza explained. “If it came to a point where Weili won and they were like “OK, we’re going to do a rematch’ and then maybe it’s time for me to stay busy. But I’ve been waiting.

“It’s been nearly seven years since I won my title. I’ve worked so hard to get back to this point and anything in a fight can happen. I’ve obviously shown that I’m willing to fight anyone and everyone in the division and I’ve been doing that my whole career. So it’s not a matter of being afraid to fight anyone. This is the opportunity of a lifetime and I don’t want to lose it to impatience.”

On Tuesday night following the latest installment of The Contender Series, UFC president Dana White was asked about Esparza waiting for the winner of Namajunas vs. Zhang and he didn’t seem all that enthusiastic about the idea.

White has never been a proponent of fighters waiting on any opportunity that could potentially put them on the sideline for any extended period of time and that obviously includes Esparza in her current situation.

“I don’t ever agree with that,” White said about Esparza’s decision to wait for a title shot. “I mean you’ve see what happens in the past. When you try to sit out and wait for a title fight, it usually doesn’t happen.

“Stuff never falls the way that it’s supposed to and you end up sitting out for too long and people start to forget about you. It’s never a wise decision to just sit out. If you get offered a fight, you should take it.”

Of course, Esparza knows she can’t wait forever, especially when she’s armed with the knowledge that the UFC is completely unpredictable when it comes to title fights no matter how much anyone has seemingly earned that opportunity.

For now, she’s willing to at least see how the strawweight title fight plays out on Nov. 6 before answering the phone again if the UFC comes calling.

“I will say that I asked [my manager] recently ‘are they at least giving me a guarantee that I’m going to get the winner of this fight or the next title fight?’ and it’s kind of crickets,” Esparza said. “I definitely want to follow up and see what the sentiment is there.

“I definitely think I deserve it and the fans have kind of backed me on that and expressed the same. I would hope that would be a given. That’s an easy answer but you never know with the UFC how it shakes up sometimes.”