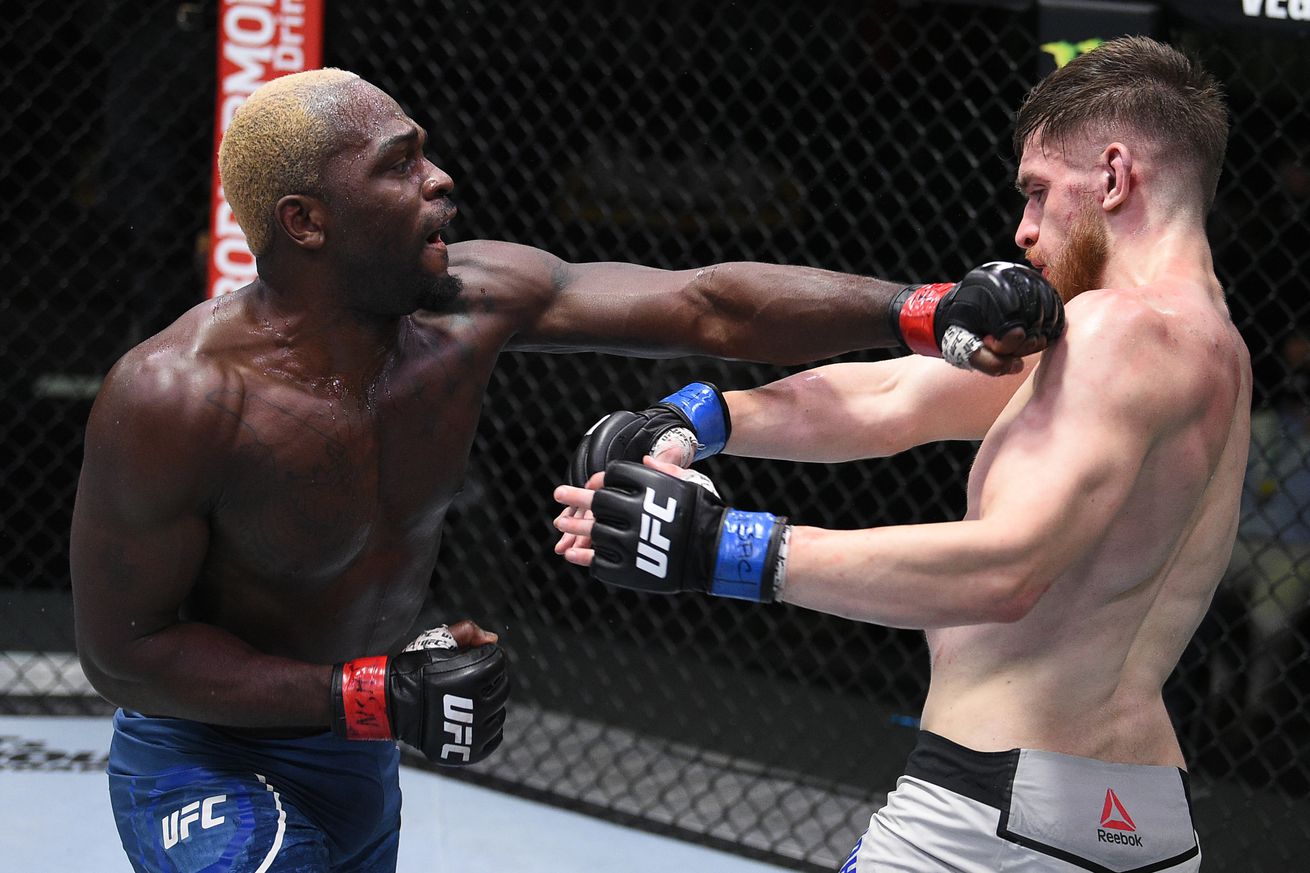 For more on Brunson vs. Shahbazyan, check out the live blog by MMA Fighting’s Steven Marrocco.

We continue to the third and final round. #UFCVegas5 pic.twitter.com/WXj8E65Hc4

Time to put some respect on his name @DerekBrunson has something to prove. #UFCVegas5 pic.twitter.com/LIksRBqZNo

Round 1: Herb Dean is the third man in the cage for the main event. Shahbazyan comes out and takes the center of the cage, meanwhile Brunson is moving on the outside and throwing some easy kicks. Shahbazyan targeting the body early but Brunson lands a body kick of his own. This is not the frenetic Brunson we’ve see so often, he’s taking his time and being patient. Now Brunson is the man coming forward and he lands a lunging left hook that backs Shahbazyan up. Immediately Brunsonn shoots a double leg and Shahbazyan throws some elbows but Brunson gets the takedown. Shahbazyan rolls and eats a few shots and now Brunson has his back. Shahbazyan stays patient and gets up and now Shahbazyan is thorwing hammers and a couple land and have Brunson on the retreat. Both men are throwing will ill intent now and Shahbazyan lands a hook to the cup that briefly stops the actiton. Thte restarter and Shahbazyan whiffs a big shot snd Brunson lands a few of his own. Shahbazyan is thtrowing punches to the body but swinging wildly at the head. The two clinch, Shahbazyan throws a knee and Brunson takes him down for it. they’re back up quickly and this is an action-packed round with both men landing small shots at the end of it.

MMAFighting scores the round 10-9 Shahbazyan.

Round 2: That was a very close round but we favor the more powerful strikes from Shahbazyan. And Shahbazyan lands a huge body kick early that gets a wince out of Brunson. Brunnson lands his own body kick but Shahbazyan respons with punches to the body. He’s made that a serious point of attack. Brunson shoots a takedown and gets a single-leg. He can’t hold it for long though and Shahbazyan is back tot the feet. If Brunson could stay on top he’d be in good shape but Shahbazyan keeps standing and he definitely has the power advantage on the feet. An eyepoke from Brunson causes the fight to be halted for a moment. The fight is restarted and Shahbazyan throws a high kick that is caught but Brunson can’t get the takedown. Now Brunson is coming forward, he backs Shahbazyan to the cage and throws some power shots. This is a banger of a fight and Shahbazyan may be slowing down a touch. Brunson now starting to go back to his old berserker style of offense and Shahbazyan is getting backed up to the fence. Brunson leaning on Shahbazyan against the cage and peppering shots. Now Brunson gets a takedown and is in side control and starting to land shots. Shahbazyan is definitely tired. He rolls to a turtle and gets hit a few times. Shahbazyan is GASSED and Brunson is raining thunder on him. Brunson gets to mount and keeps the shots coming. Shahbazyan is surviving but this is a rough round for the undefeated prospect. OH MY GOD, WITH SECONDS LEFT, SHAHBAZYAN IS GETTING UNLOADED ON. It looked like Shahbazyan was out as the horn sounded but Herb Dean has not waived the fight off and Shahbazyan gets up and is sitting on his stool but looks completely done.

Round 3: Herb Dean calls a timeout to bring the doctor in before the start of the round and Brunson’s corner is livid that Shahbazyan is getting time to recover. The round starts and Brunson is all over him. Brunson lands a left hand and gets a takedown. Shahbazyan quickly turtles, Bruson lands a couple of shots and Herb Dean immediately steps in. It seems like Herb Dean was just waiting for the opportunity to stop it and it’s a good stoppage.

OFFICIAL DECISION: Derek Brunson stops Edmen Shahbazyan by TKO (punches) at 0:26 of the third round.