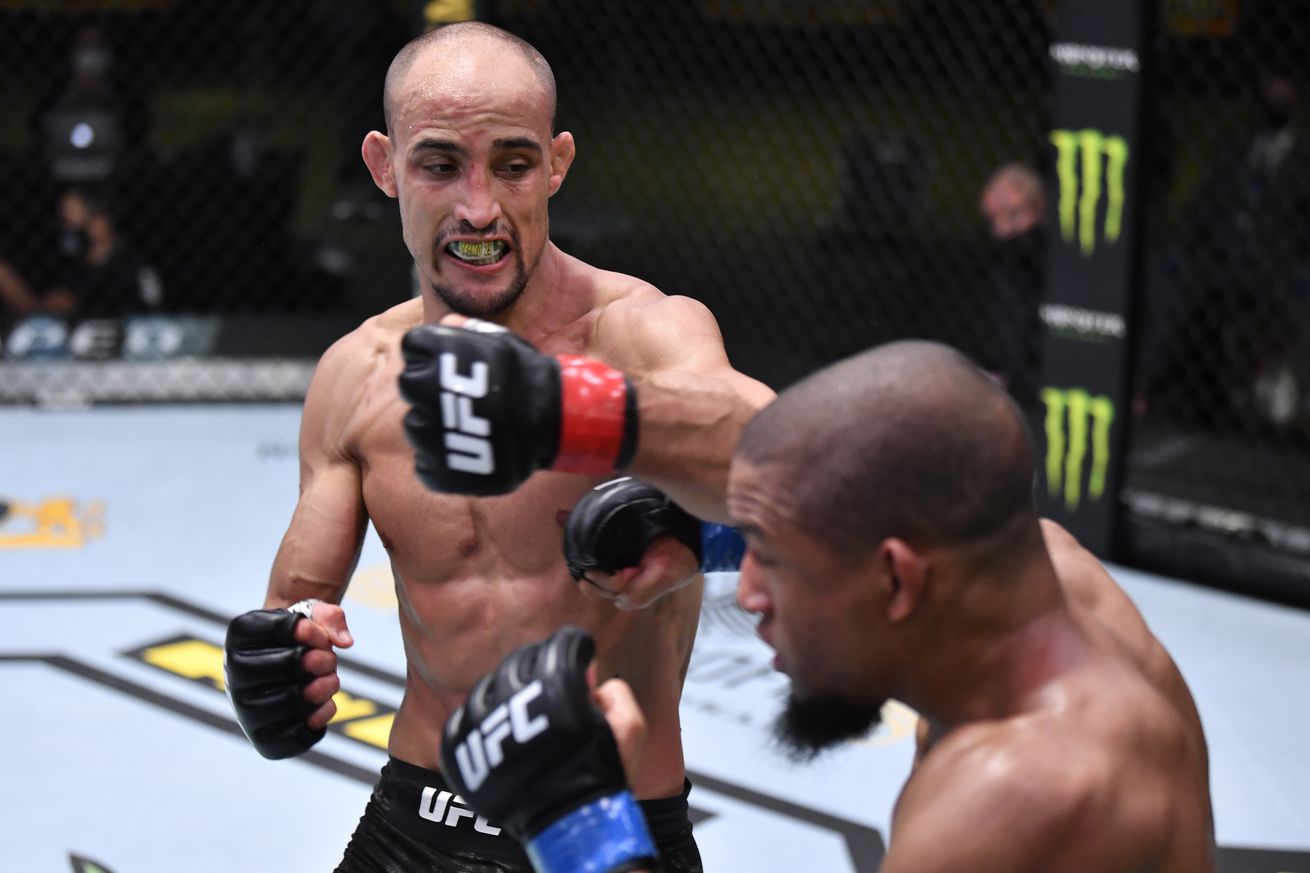 Geraldo de Freitas is no longer a part of the UFC roster, but he will still face a two-year suspension from the United States Anti-Doping Agency following a positive drug test returned while he was competing for the promotion.

USADA officials announced on Wednesday that the Brazilian, who amassed a 1-2 record in the UFC prior to his release, was suspended after an independent arbitrator upheld the two-year sanction initially handed down for his doping policy violation.

This decision comes after the facts of the case were presented and fully argued at evidentiary hearings on July 21, 2021 and September 15, 2021.

“De Freitas, 30, tested positive for exogenous administration of testosterone and/or its precursors as the result of an out-of-competition drug test collected on October 14, 2020,” USADA officials wrote in a statement. “De Freitas’ urine sample was analyzed using a specialized test, known as Carbon Isotope Ratio (CIR) testing, that differentiates between anabolic androgenic steroids (AAS) naturally produced by the body and prohibited anabolic agents of external origin. The CIR test confirmed the presence of testosterone and/or its precursors of external origin in Augusto de Freitas’ urine sample.

“The sample results of the initial analysis were reviewed within the Athlete Biological Passport (ABP) Program, which tracks multiple urinary biological parameters and their ratios over time, and the data triggered an atypical ABP finding including a deviation in the testosterone/epitestosterone (T/E) ratio and other steroid parameters when compared with de Freitas’ previous samples. This resulted in CIR testing on the sample.”

As afforded to all athletes under the UFC’s anti-doping program, de Freitas was granted an arbitration hearing where he claimed that he did not know how the banned substance got into his body and he attempted to prove that the positive test was the result of an error or his use of a legally allowed substance.

In his defense letter sent to the independent arbitrator that oversaw the case, obtained by MMA Fighting, de Freitas noted that he was informed by USADA that the out-of-competition test done on Oct. 14, 2020 came back with “no evidence of prohibited substances found in the samples.” He states, however, that the same sample “had been subjected to a new analysis” on Jan. 11, 2021, this time coming back positive for “testosterone and its metabolites Androsterone, Etiocholanone, 5AAdiol, 5B-adadiol of exogenous origin.”

De Freitas questioned why the lab would re-test the sample after a negative result, and pointed out that the sample number on the document provided by the lab was different than the one if was sent previously (20A02225 instead of 20A02235). USADA noted that “the discrepancy in the Laboratory Reference Numbers resulted from a manual transcription error and that the more relevant identification number was the urine sample code number – 1631118 – which is what ties the sample to the laboratory results, and that the urine sample code number was the same on both the Laboratory Certificate of Analysis and the test report.”

“Why was the result considered negative according to the USADA letter, and there was no mention of the possible presence of testosterone?” De Freitas questioned in his defense letter. “If a second analysis was performed on the first sample almost three months later, what guarantee is there that the already violated bottle has not been cross-contaminated?”

De Freitas also claims that Dr. Henrique Marcelo Gualberto Pereira, manager of the Rio de Janeiro lab, issued a “sincere apology” when the fighter arrived to oversee the testing of the B sample, admitting that “the code 20A02225 was someone else’s analysis and confirmed my code as 20A02235. That, again, brings us to another and new inconsistency, considering that differs from the answer given to me by USADA, that it had been a typo and that the 20A02225 was actually the sample code 1631118 and consequently the laboratory code 20A02235.”

The former UFC fighter also claimed that “equipment used on the procedure had its maintenance expiration date” since Aug. 2020, six months prior to his testing.

“As far as I was informed, the same [equipment] is responsible for submitting the fractions of my urine to a specific temperature to undergo new procedures so that the analysis at the end of the process does not suffer or gets harmed by any unwanted influence,” he wrote in the letter.

“Considering everything I reported to you, from sending a doc pack with wrong codes, disconnected justifications to so many mistakes being made repeatedly since 2011, I affirm that any such laboratory should be considered partial to perform the analysis in my counterproof,” de Freitas continued. “And, finally, I request the annulment of the two-year sanction imposed to me, together with the non-disclosure of the suspicions that fell on me concerning my reputation. I ask you to consider the irregularity with the expiration dates of maintenance that I was able to verify during the follow-up of the tests to which my urine was submitted.”

The independent arbitrator ultimately concluded that de Freitas failed to prove his case without any evidence to back up his claims.

While his case was still pending, de Freitas actually fought and won a fight while competing for Shooto in Brazil back in July.

Despite de Freitas no longer competing in the UFC, the suspension from USADA is reported to the Association of Boxing Commissions and other commissions who serve as part of that same council will recognize those sanctions even if the athlete has left the promotion.