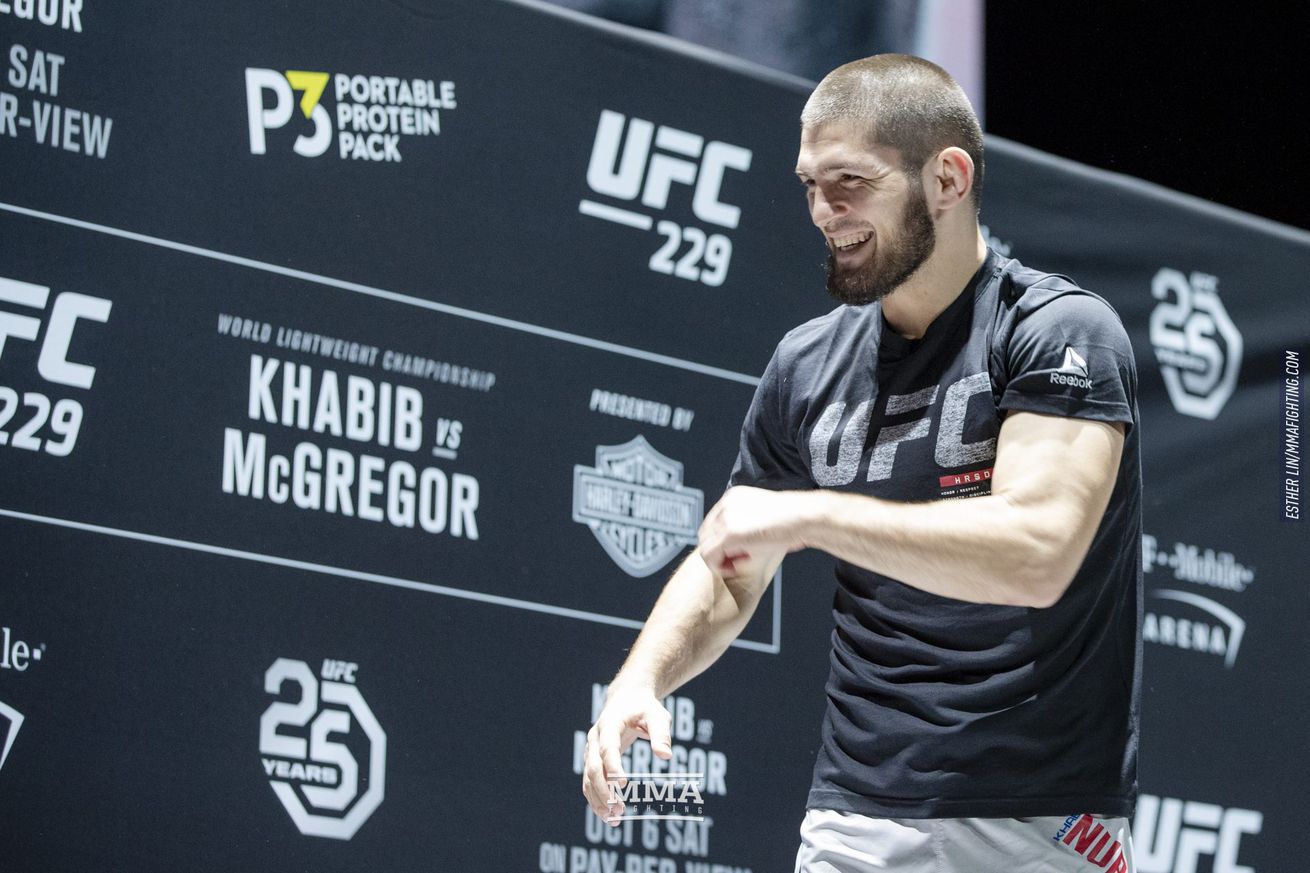 The UFC is finally finished on Fight Island but that doesn’t mean they’re stopping anytime soon. There are fights for the next 13(!) weekends in a row, kickstarting with tonight’s middleweight matchup between Derek Brunson and Edmen Shahbazyan. So let’s talk about that, plus the rumors circulating that Khabib Nurmagomedov only has two fights left in his career.

The UFC’s return to the APEX

If Edmen beats Brunson which I think he will does this mean that he should win 2 more fights before fighting for the title ?

Originally, this question had many more facets to consider, namely, whether the winner of tonight’s main event might sneak their way into a title shot immediately with a good performance. However, with Friday night’s announcement that Robert Whittaker would be facing Jared Cannonier next, all talk of an immediate title shot can go out the window. The winner of Whittaker-Cannonier seems like a virtual certainty for the next middleweight title shot against the winner of Israel Adesanya and Paulo Costa. Even if Adesanya and Whittaker both win, I still imagine the UFC is going to want to run that one back, which means the winner tonight needs one more victory before they get to challenge for the title.

Fortunately, that “one more victory” is a pretty easy one to set up. Jack Hermansson did lose to Cannonier not that long ago, but he rebounded with a sensational win against Kelvin Gastelum and is 4-1 over his last five fights. I think the most obvious course of action here is for the winner tonight to face Hermansson at the end of the year in the main event of a Fight Night. Then the winner of that is next in line to face the winner of Adesanya/Costa winner vs. Whittaker/Cannonier winner. It’s a clean line of progression that keeps the middleweight title booked solidly through the summer of next year. It’s almost too perfect.

As for tonight’s fight itself, I do favor Shahbazyan but I think Derek Brunson is getting the short shrift here. Brunson is a known commodity at this point and has lost to all the best fighters he has faced, however, Shahbazyan is still very much a work in progress. Yes, he’s talented, but he’s super young, and this is a big step up in competition. If he goes out there and knocks out Brunson, I won’t be shocked but conversely, I could easily see Brunson just tackling him to the ground for 15 minutes. I guess the core of my thoughts on Shahbazyan are that he seems like a good prospect but not a full-blown prodigy and the track they are putting him on is closer to the latter than the former. At some point, he’s going to slip up and that point may well be this evening.

Speaking of the middleweight division

Darren Till is 1-3 in his past four bouts, but he still seems to be a contender with a lot of upside. If you were the UFC matchmakers, how would you shape his path over the next couple years?

Darren Till is a tricky customer. He’s obviously talented and, at one time, I thought he’d be the welterweight champion, but I’m also not sure he’s actually very good at fighting. I mean, he clearly is, but he also is more than willing to let the perfect be the enemy of the good. Till’s level of activity is so low that her relies on singular instances of big offense to win fights instead of steady work and that is a real problem at the top of the sport unless you’re an all-world specimen like Yoel Romero.

The thing is, no one recognizes this about Till because of his personality. He’s 1-3 in his last four, but that one win was an extremely tight split decision with Kelvin Gastelum. Even his last win at welterweight before moving up was a decision against Stephen Thompson that reeked of home cooking. Seriously, the lone impressive win of Till’s career is a TKO of Donald Cerrone who, no offense, is a very known commodity and easy matchup for Till.

So with all the being said, I have no idea what to do with Darren Till. He’s go tons of charisma and people clearly enjoy him and he obviously has the ability to fight but I don’t know that he’s ever making a real middleweight title run unless you really craft out a path for him. But if I’m the UFC and looking to do just that, he’s how I’d go about it:

Do you think Khabib will fight Gaethje and then GSP? Because with the news that he will only fight two more times and then retire I don't see a lot of big fights for his retirement. Maybe Conor?

Well he’s definitely fighting Justin Gaethje because that bout was just announced for October. And should he beat Gaethje, yes I think he probably does fight Georges St-Pierre in the spring.

Personally, I’m not sold on the idea that Khabib only has two fights left. Khabib’s father was always pretty clear about wanting his son to retire at 30-0 but Khabib always seemed less sure of that. Now, the death of Abdulmanap Nurmagomedov may have changed Khabib’s mind but I certainly don’t know and I think anyone saying they are confident in Khabib’s thoughts right now is a liar. If it does happen though, that means Khabib is retiring from the sport at the top of the game and still just 32 years old. It would be an incredibly rare thing to do.

That being said, isn’t it the perfect way to walk away though? Father Time is undefeated and if Khabib keeps fighting, eventually he will lose and while most rational human beings don’t hold later career losses against fighters, there is an undeniable mystique to an undefeated, undisputed UFC champion. Hell, think of the different way we’d think of Anderson Silva’s legacy if he retired before the first Weidman bout as was rumored he might. If Khabib retires on top, he will rightfully and automatically be a part of any GOAT conversation. And is there a bigger way to exit the sport than defeating the fighter generally considered to be the greatest ever, while simultaneously fulfilling your late father’s wishes for your career? That’s Disney movie stuff (you know, if you ignore a lot of the horrible ancillary things like Ramzan Kadyrov). Whether or not Khabib chooses to take that path will be entirely up to him but honestly, it’s the outcome we should all be hoping for if for no other reason than to say we were there when a legend walked the cage.

Khabib vs. GSP as a business

how well would gsp khabib sell?

Khabib is a massive global star. He is legitimately the second-biggest star in the sport behind only Conor McGregor. There is definitely some truth to the point he used to make that Russia has 144 million people. All of them love him and he’s also a major star in much of the Muslim world due to his devout religious beliefs. Add in another dominant championship defense (because let’s be honest, if he wins it will be dominant, if he loses, it will be violent) and he’s only going to keep growing his profile.

On the other side of things, Georges St-Pierre is one of the five biggest stars in the history of the sport. He’s sold over 9 million pay-per-views in his career. Furthermore, he’s largely considered to be the greatest fighter of all time and sold 875,000 buys when he came back after a four-year hiatus from the sport.

So picture this: Khabib Nurmagomedov is 29-0, the greatest fighter ever in the greatest division and arguably the best fighter of his generation, defending his belt one final time to honor his late father. Georges St-Pierre, the GOAT, a two-division champion, coming out of retirement to do something no one has done before, win titles in three divisions in the UFC. It’s a battle for legacy. Who is the true GOAT? The UFC gives it the full-court press, a worldwide media tour with stops in Russia, Canada, the U.S., and Abu Dhabi. Months of constant build up, giving GSP time to get back into USADA. How on Earth does that not break 2 million PPV buys? The only way the UFC could make it bigger would be to have Conor McGregor be the special guest referee.

Thanks for reading this week, and thank you for everyone who sent in Tweets! Do you have any burning questions about at least tacitly related to combat sports? Then you’re in luck because you can send your Hot Tweets to me, @JedKMeshew and I will answer them! Doesn’t matter if they’re topical or insane. Get weird with it. Let’s have fun.