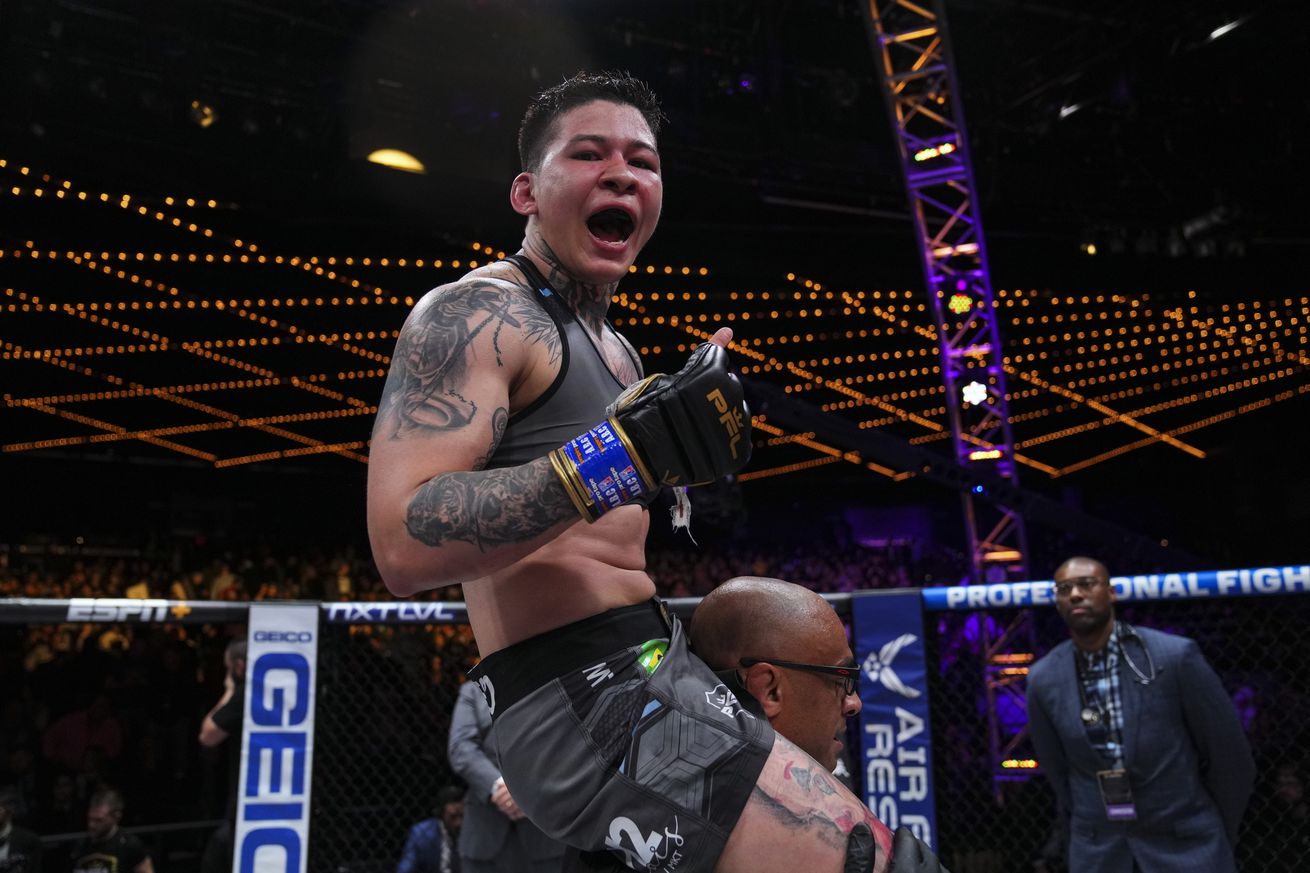 Larissa Pacheco can’t be certain what comes next for her following an upset win over Kayla Harrison but she definitely has some ideas.

After handing the two-time Olympic gold medalist in judo her first defeat in mixed martial arts, Pacheco already knew that she would eventually see Harrison again — possibly even her next fight. As it stands, Harrison holds two wins over Pacheco so the 28-year-old Brazilian knows there’s still some unfinished business between them.

“Like I told her [after our fight on Friday], I’ll gladly give her the rematch,” Pacheco said on The MMA Hour. “It’s the fight to happen and she deserves it. I’m losing 2-to-1 so I need to catch up with her.”

While Pacheco anticipates crossing paths with Harrison again, the PFL hasn’t made any decisions just yet about what will be scheduled when looking ahead at the 2023 season.

Prior to her loss, Harrison had already decided that she wasn’t going to participate in the typical regular season tournament format next year but rather focus on individual “super fights” that wouldn’t be as taxing on her body.

Meanwhile, Pacheco isn’t against returning for another season, which could earn her another $1 million prize, but she’s also open to the idea of those same one-off contests that could allow her to face Harrison again or other top fighters in the same division.

“I want to work. I’m interested in everything. It’s just been three days so I don’t know what the organization is going to do. I’m in for anything. I want to work.”

While Harrison had been openly calling for a fight against Cris Cyborg, her loss will likely dampen any enthusiasm that had been building towards that potential showdown.

Now that she’s riding the momentum off her stunning win against the two-time PFL champion, Pacheco believes maybe now she’s in line for that fight instead.

Another possible opponents that could draw Pacheco’s interest in 2023 is ex-UFC fighter Aspen Ladd, who made a successful debut with the PFL after earning a split decision over Julia Budd at the championship card this past Friday.

Following her win, Ladd credited Pacheco for making the necessary improvements to beat Harrison but then slighted both athletes when stating that their resumes are “nothing compared to the people that I have fought.”

In response, Pacheco didn’t really understand why Ladd felt the need to take a shot at her but perhaps deep down it’s just an attempt to get some attention by going after the winner from the main event in the show where she was competing on the undercard.

“I don’t know why she’s saying these things,” Pacheco said. “She just got here. I think she’s trying to come over to the window and trying to catch the bus in movement. She got cut from another organization because she couldn’t make weight.

“Yeah, we’re in the same organization. If we have to fight, that’s the way it’s going to be. I just think she’s trying to move ahead of herself.”