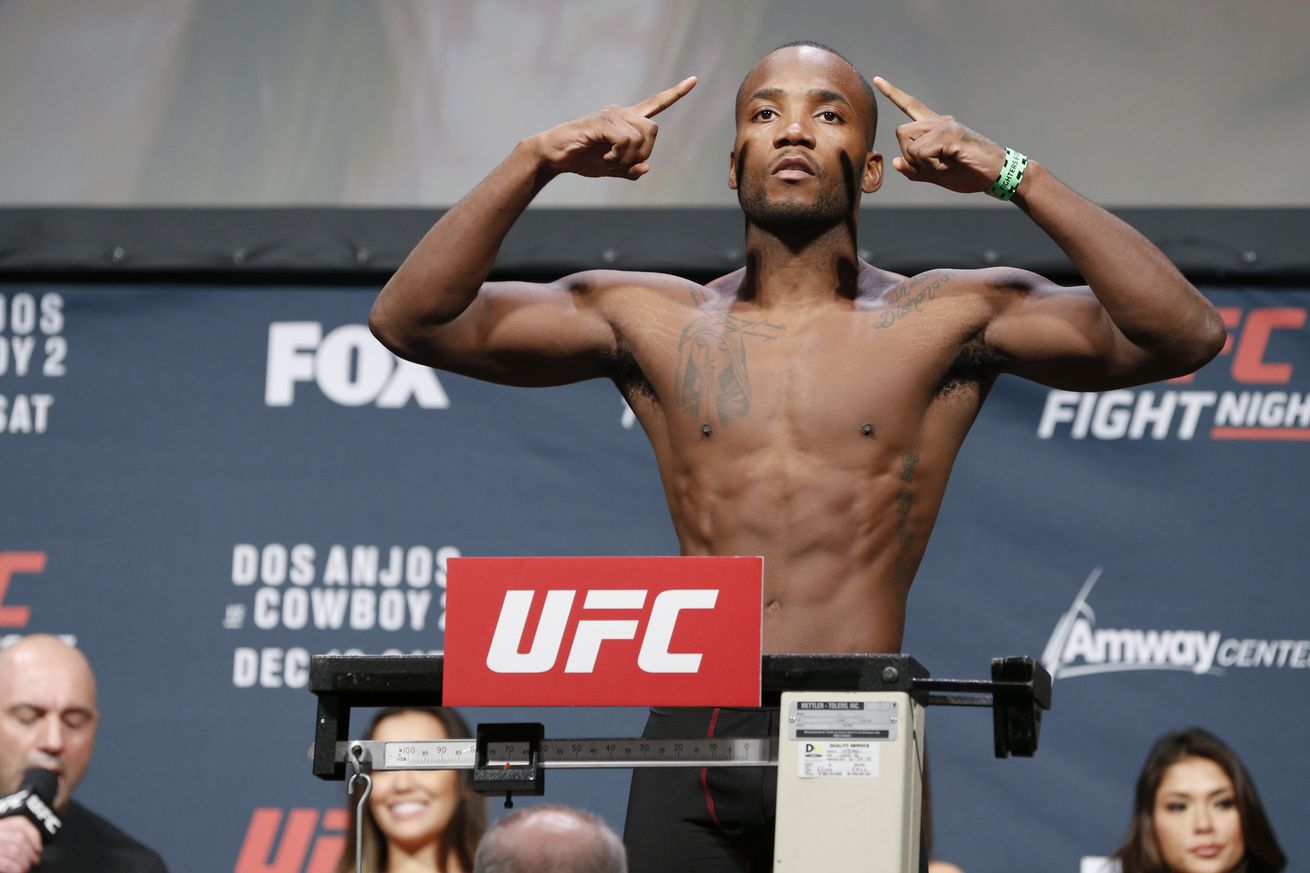 Leon Edwards is feeling pretty good about his fight against Khamzat Chimaev next month.

Originally, Edwards and Chimaev were scheduled to face each other at UFC Vegas 17 in December but the fight was postponed to January when Edwards contracted COVID-19. That bout was in turn postponed when Chimaev contracted COVID-19. Now, Edwards and Chimaev will fight as the main event of UFC Vegas 21, and when it’s all said and done, Edwards believes he’ll have earned his title shot.

“They probably want to push this kid up, trying to rush him, right?” Edwards told Submission Radio. “Like they do everyone else. They’re trying to get him a big win under his belt, trying to push him towards the title, probably. So that’s probably why they’re trying to keep the fight going. But they’re in for a rude awakening come March 13, and I cannot wait to get my title shot after this.”

Edwards has had a “Rocky” road with the UFC recently. The Birmingham native is on an eight-fight win streak in the welterweight division, with wins over some big names, but has been at odds with officials over fights. He was briefly even dropped from the rankings last year due to inactivity. Following that, Edwards accepted the fight with the then-unranked Chimaev, a decision which puzzled many given Edwards’ status in the division but which Edwards explains as necessary business for himself.

“For me the upside is, I think take out the champion, right?” Edwards said. “He’s one of the biggest names in the division, I think, from how much they’re putting into him, how much attention they’re giving him and how much Dana’s getting behind him. So, if I go out there and beat the guy that they’re picking to win, that they want to win anyway, then that puts me in a perfect position for a big title fight. So, that’s the only reason, really.

“At the time, people like Wonderboy was on offer and stuff like that, and I didn’t think they had the same buzz around to get me to where I need to get to. And I’m on an eight-fight win streak, I beaten all these guys already, and so that’s it really. They put all the hype around him, [so for me] just to go out there and show him that I am on another level, and that’s it, that’s the hype, nothing else.”

Chimaev is certainly well-hyped. “Borz” stormed onto the UFC last year, picking up three dominant wins in just over two months and taking home 2020’s Breakout Fighter of the Year award. Dana White in particular has been enamored with Chimaev, even going so far as to double book Chimaev with bouts. Chimaev himself is mirroring this confidence, calling out practically anyone at welterweight or middleweight and setting his sights on being a two-division champion in the UFC, just as soon as he walks through Edwards. But Edwards says he’s here smash the hype train.

“He just loves to talk, right? He just talks just to talk,” Edwards said. “If he’s judging me on the Usman fight (laughs) which is like five, six years ago, then he’s in for a rude awakening, I’ll tell you that. What’s he got to offer, really? I think he’s a novice for what he does. The shots he throws, the technique he uses is quite novice. And I remember being there, I remember being a 9-0 guy, you know what I mean? Ah, it is what it is. He talks whatever he wants to say, and we’ll see come March...

“I think the guy’s record of people who he’s fought is like 6-10 or something, all together, all the record that they’ve put together in the UFC. I’m on an eight-fight win streak alone in the UFC. Opponent-wise, there’s levels. You cannot compare me to no one that he’s fought in his career.”

“There’s being confident, then there’s being deluded. It’s two different things. I’ve never been deluded. I think he’s deluded. And obviously if everyone blows smoke up your ass, then you’re gonna start believing it. And if that’s all it is and everyone blows smoke up his ass that he’s the best thing since sliced bread, so you’re gonna start believing it. I think that’s all it is.”

Whether Chimaev is deluded or not will be revealed in time but it’s clear that the UFC doesn’t think so. The fight between Edwards and Chimaev was ostensibly set up to catapult Chimaev to a welterweight title shot and though no promises have been made to Edwards of the same happening should he win, “Rocky” says if he does what he expects to do next month, there won’t be a debate.

“Colby got knocked out under a year ago. Masvidal got beat under a year ago. I’m on the most fight win streak in the division, apart from the champion. So, like I said, this is my ninth win in a row, and so that’s it, really. I feel like I’ve done more than everyone else, and it’s now my time for a title shot.”

UFC Vegas 21 takes place on March 13 at the UFC Apex in Las Vegas.

Difference. Gilbert Burns: ‘The difference between me and Kamaru Usman, he wants to dominate you … I want to finish you’.

Backup. Glover Teixeira says he will be backup for Jan Blachowicz vs. Israel Adesanya at UFC 259.

We have some interesting things coming together! pic.twitter.com/0a51196tb0

You gotta get the ground beneath your feet, partner, get the wind behind your back, and go out in a blaze if you got to. Otherwise, you ain't shit.

T minus 3 days away from #WORKTIME #UFC258 #ANDSTILL pic.twitter.com/o7QaWDilpg

Sage back in the game.