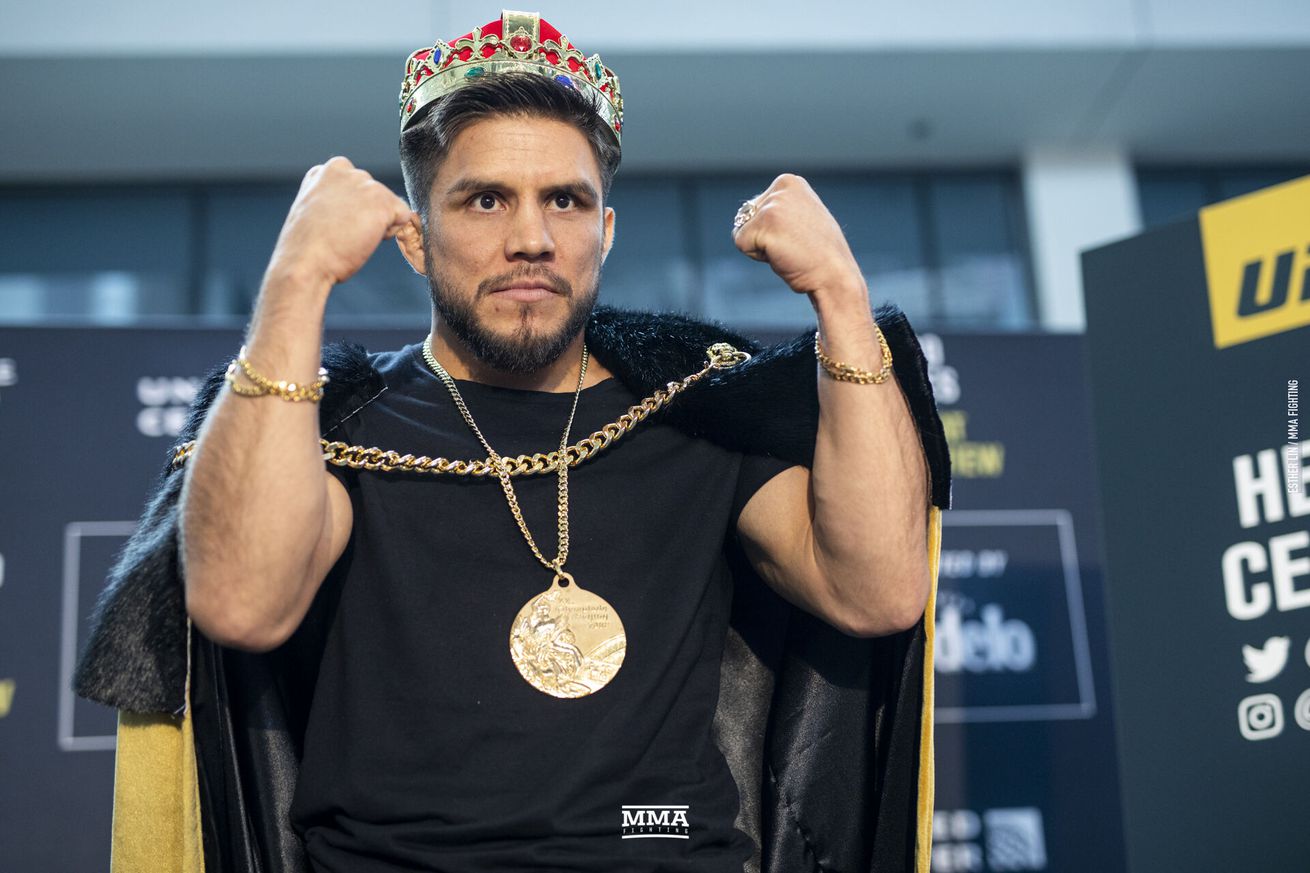 Thirteen years after he competed at the Olympic games, Henry Cejudo found himself going head-to-head with another gold medalist.

The wrestling champion and former two-division UFC titleholder interviewed 1996 Olympic gold medal-winning gymnast Dominique Moceanu this week via Instagram to engage in a cordial debate about the Simone Biles controversy that has become one of the major talking points of this year’s Tokyo Olympics.

Biles, the most decorated gymnast in the history of the sport, withdrew from the team portion of the Tokyo Olympics citing mental health issues. She went on to participate in only one individual event, the balance beam, in which she added a bronze medal to her collection that includes four Olympic golds. Her decision not to compete has polarized opinions, with some, including all-time great swimming champion Michael Phelps, supporting Biles and praising her for putting her health first, and others accusing her of quitting.

Though Cejudo is a fan of Biles, he recently took to Twitter to criticize her withdrawal, which led to him inviting Moceanu to speak to about the topic. Moceanu was part of the 1996 USA Gymnastic team in Atlanta that won gold and she has publicly supported Biles while sharing some of her own difficulties with competition including a clip of a scary fall.

I was 14 y/o w/ a tibial stress fracture, left alone w/ no cervical spine exam after this fall. I competed in the Olympic floor final minutes later. @Simone_Biles decision demonstrates that we have a say in our own health—“a say” I NEVER felt I had as an Olympian. pic.twitter.com/LVdghdAh1g

Supporters of Biles have pointed to the traumas that she and hundreds of other young gymnasts have had to endure, notably the USA Gymnastics-Dr. Larry Nassar sexual abuse scandal that dates back to to the late 1990s, as well as the immense pressure she has dealt with as the face of USA Gymnastics and the high chance of injury she risked had she chosen to compete with her mental faculties compromised.

Moceanu refrained from pointing to Biles’ current situation as having been specifically affected by Nassar’s crimes, but she did elaborate on why she feels Biles made the right call.

“I don’t want to speak for her on [the abuse] because that’s a very personal topic,” Moceanu said. “It’s very, very intimate and it’s very personal. So I don’t want to speak for her, that’s something for her to speak up on, but I can tell of the history because I’ve been an advocate for athlete safety for so long and Henry, people ignored it. Girls were being molested in our sport. People were getting hurt. There were brutal injuries. We were never allowed to say anything. I collapsed in the gym when I was 14 years old and my coach just grabbed me by my neck, ‘Go call your parents, maybe your leg’s broken.’ Just disregard for human beings.

“We were little girls. Young women who could never have a voice in our health and well-being. It was always placed last. Now I’m sure there’s a part of that where Simone has that history and trauma that’s now playing into this Olympic cycle saying, ‘Look, there’s something going on that doesn’t feel right.’ Now when you feel that you have to speak up and say, ‘You know what? I need to get this handled.’ There was video that showed you that she was not oriented in the air, she was falling on her back and she showed it on Instagram so anybody who was doubting that she had an issue, there it is, front and center, you can see it. And I know what that feels like because I deal with athletes all the time that go through mental blocks and it’s a very severe and almost paralyzing fear.”

Experts have pointed to Biles suffering from a phenomenon called “the twisties,” in which a gymnast risks losing their ability to control themselves in the air, potentially leading to severe injury (Biles herself acknowledged that this was a concern).

Cejudo suggested that the media and fans played a role in building Biles up to a standard that she may have struggled to match and Moceanu agreed that pressure can contribute to the uncertainty when competing. However, Cejudo wondered if this was something Biles could have overcome.

“The mind is always a part of the sport and that’s why you have to have a handle on it when you’re in a competition setting,” Moceanu said. “You’re on hard mats. Any wrong twist or opening in the air can lead to a catastrophic injury that could be jeopardizing or put you in a wheelchair. That’s the severity of it. You have to remember that all of it coupled in, it ended up happening on the grandest stage, but you have to also know that she has dealt with this type of issue in practice before. This is not something new. You’re just seeing it now on the largest scale of them all, the global scale of the Olympics. You know how magnifying it is, especially in our sport. Every four years people tune in to watch the women’s Olympic games, the women’s gymnastics portion, one of the most popular events. Simone was the ‘it girl’ for this Olympics.

“So to say that she can’t handle pressure is not really appropriate because it’s coupled with other things. You’re conflating two issues, the GOAT issue and then the twisties and the anxieties and the pressure, those are different things and you can’t conflate the two issues because they’re two separate issues. Let the fans, let the media talk about the GOAT. We’re not really in the discussion of that. We’re in the discussion of had Simone not spoken up for her well-being when for so many years her sports been plagued with abuses, then she wouldn’t be doing herself a service. She was smart enough to say, ‘Hey, something went wrong on the first event, I need to step back, let the team do their job,’ and she was the best cheerleader for them. Did you ever see her not being awesome to her teammates and cheering them on? She just showed a lot of character by doing that. Now Team USA had to step up, there’s no doubt, but that’s what you do in a team setting. You put yourself in a situation where it’s the smartest and best decision for safety and I have to commend that.”

Cejudo recalled his own experience not just at the 2008 Beijing Olympics where at the age of 21 he became the youngest American ever to win gold in wrestling (a record later broken by a 20-year-old Kyle Snyder in 2016) but at the Olympic Trials leading up to that event. After qualifying for the Olympics, Cejudo said coach Terry Brands grabbed him by the neck and “slaps the crap out of me” twice, calling it “the best thing someone could have did to me because it brought me back down to Earth that this job still wasn’t done.”

“What I’m saying is I hope Simone has a great support system because at times we do need a kick in the arse, you know that,” Cejudo clarified. “And I just feel like it was one of those situations where it’s like, ‘Simone, you are so good. You are so good. Listen to your ability.’ This is normal, yes, you are carrying the Olympic games, I understand the whole mental stuff that people are trying to portray but I feel like it was just a little more pressure and it was just a little too much.’”

Moceanu countered by saying that she herself was often driven by fear of her coaches, which isn’t something she believes athletes should be motivated by. She also balked at the suggestion that Biles wilted under pressure, given Biles’ extraordinary success in her career thus far.

“Simone didn’t give up,” Moceanu said. “The way you’re depicting this is saying, ‘Oh, Simone just gave up halfway through the competition on her team and then expected everyone to carry the weight.’ That’s kind of what you’re saying, ‘Hey, this is the Olympics. Push through.’ If it was something different than this kind of a block mentally, sure she could have pushed through and she did. She showed it in the balance beam finals. She showed that she came back, she worked through whatever was going on, and she got a hold of it. She got a lighter dismount on her beam and she was able to collect her seventh Olympic medal, more than you and me. And she has way more worlds and Olympic medals than anybody. So when you combine all that she’s done in the sport—She even competed with passing kidney stones at the last world championships. She’s gone through her fair share of adversity is what I’m trying to say.

“This is not about she gave up, because I think that’s the misconception that maybe your perspective is, ‘We’re gritty, we’ve got to tough it out.’ And I get it, as a fighter and as a wrestler you do that. I have a lot of grit, trust me, I’m battle-tested. I have my battle wounds and so I know how this mentality is. But for so long it’s been a dangerous fine line in our sport because it’s been coupled with abuse of little girls, physically, emotionally, mentally. So the pendulum had to swing because it led to this whole Larry Nassar abuse scandal with USA Gymnastics and beyond. The pendulum had to swing a little bit all the way to the other side to try to have a voice now for our athletes and make sure that if something is not right, you are speaking up as you would like your daughter to speak up when it comes to her safety.”

By the end of Cejudo’s conversation with Moceanu, he didn’t sound completely convinced that Biles did the right thing, but he echoed the sentiments of fellow retired UFC champion Daniel Cormier in noting that it’s on Biles to make peace with her decision when it’s all said and done.

“I get it, the thing is that Simone does some special stuff in gymnastics,” Cejudo continued. “I just feel like she could have pushed the bar so high that nobody would have touched it. That’s all I wanted to see. The situation, she knows it. She’s gonna have to live with it. If she’s okay with it, then I’m cool with it too.”

TUF. Check out the results from the first middleweight semifinal of The Ultimate Fighter 29.

UFC Unfiltered. Ciryl Gane talks to Jim Norton and Matt Serra ahead of his interim heavyweight title clash with Derrick Lewis at UFC 265.

Your #UFC265 artist series has dropped

Four days until @TheBeast_UFC and @Ciryl_Gane meet in the middle!

What a year for Terrance McKinney.

Highlight Reel: I had 4 fights this year, all 4 fights ended in a KO. My longest fight was Michael Ortiz at just over a minute. Who will be #5 before the year ends??!

Shout to @paulwallbaby and @TobeNwigwe for the motivation, on God! pic.twitter.com/3ANXdB0C2p

People are celebrating this for some odd reason. Strange "MMA fans" who treat promotions like sports teams. https://t.co/vAU885qrzE

“The Fighting Hawaiian” vs. “The Korean Superboy?”

If you or someone you know is dealing with mental health issues, don’t hesitate to reach out for help and support:

Anxiety and Depression of Association of America

Take care of yourself and each other.