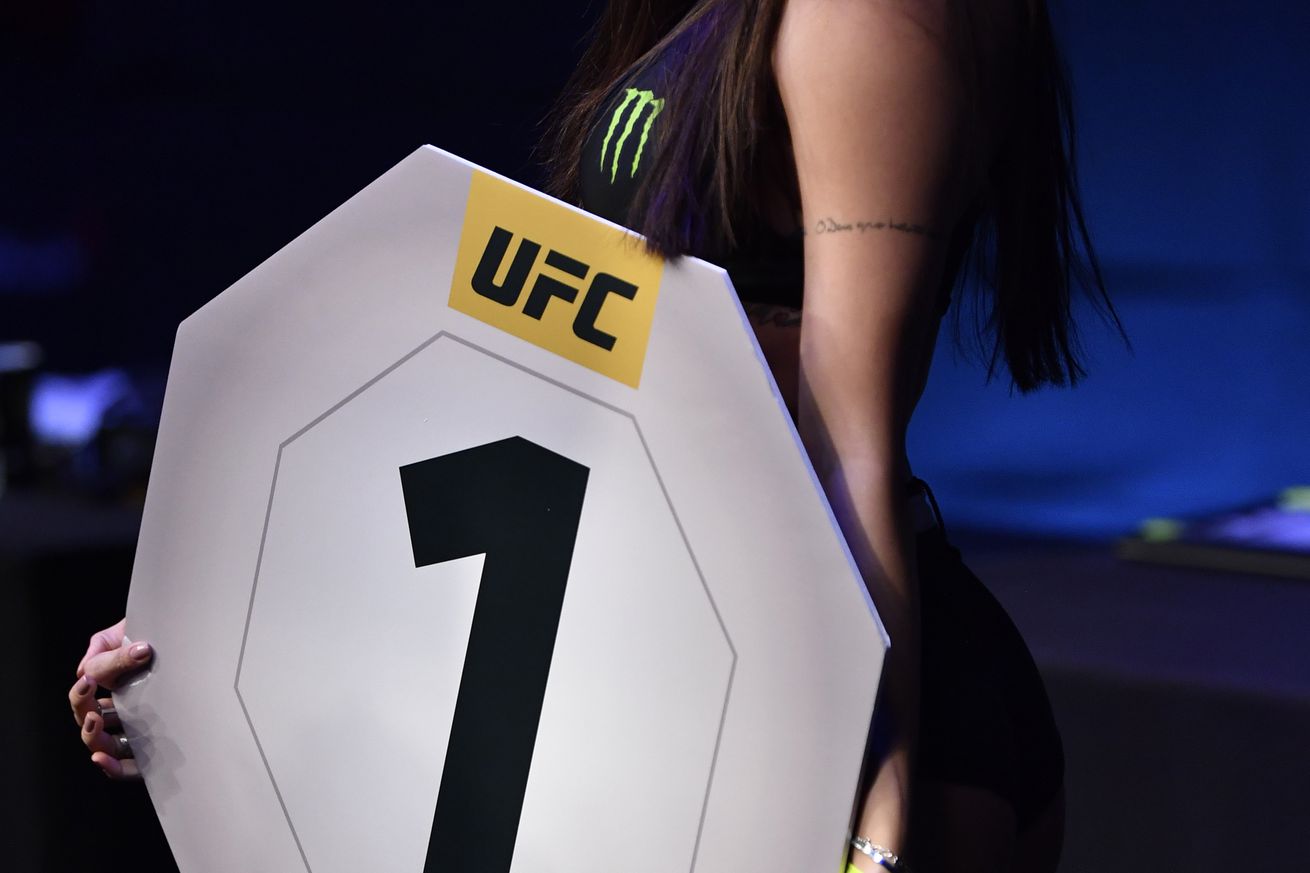 Only the ESPN+ subscription fee stands between you and the brutally-stacked UFC 267, which will take place this weekend (Sat., Oct. 30, 2021) inside Etihad Arena on “Fight Island” in Abu Dhabi, United Arab Emirates, featuring two title fights and some of the best up-and-comers in the game. UFC 267’s main event will witness Jan Blachowicz look to continue his surprising 205-pound reign against stalwart veteran Glover Teixeira, while former Bantamweight champion Petr Yan dukes it out with Cory Sandhagen for an interim version of the 135-pound title. In addition, Islam Makhachev squares off with Dan Hooker in a pivotal Lightweight battle and Alexander Volkov meets Marcin Tybura in a clash of Top 10-ranked Heavyweight contenders.

This massive card features nine “Prelims” undercard bouts on top of the six-fight main card. Let’s slice off the early portion and have a look ...

Shamil Gamzatov (14-0) got off to a strong start in PFL’s 2018 Middleweight tournament, only to withdraw with an injury. As a consolation prize, his success earned him a spot in the Octagon, where he narrowly edged out Klidson Abreu in his 2019 debut.

“Umar” fights for the first time in nearly two years.

Brutal finishes of Gian Villante and Gadzhimurad Antigulov catapulted Michal Oleksiejczuk (15-4) into Light Heavyweight contention, where Ovince St. Preux and Jimmy Crute cast him out with a pair of submission. Undaunted, Oleksiejczuk returned to the win column with a controversial split decision over Modestas Bukauskas in March 2021.

He has stopped 11 foes during his 8.5-year professional career, 10 of them via knockout.

Beating a handful of consistently underwhelming Light Heavyweights may have given us an inflated view of Oleksiejczuk’s abilities. In addition to the two losses mentioned above, Oleksiejczuk was very fortunate with the judges against Bukauskas, who ruthlessly exploited the Pole’s one-note offense and inability to cut off the cage.

That said, raw pressure and power may be sufficient to carry him past Gamzatov, a fellow flat-footed puncher who’s coming off a huge layoff and failed to impress against Abreu. Combine that with a historical tendency to gas on “Umar’s” part and you’ve got a recipe for Oleksiejczuk to snowball down the stretch for a late stoppage or comfortable decision.

Makwan Amirkhani (16-6) enjoyed an explosive rise through the UFC ranks, winning five of his first six Octagon bouts and fighting top prospect Arnold Allen to a split decision in the lone defeat. “Mr. Finland” is now just 1-3 in his last four, having suffered consecutive decision losses to Edson Barboza and Kamuela Kirk.

He has scored 11 submissions as a professional.

He wasn’t quite able to cash as a more than two-to-one underdog, but Lerone Murphy (10-0-1) successfully held Zubaira Tukhugov to a draw in his late-notice Octagon debut. Subsequent efforts proved more successful, as he stopped Ricardo Ramos to earn “Performance of the Night” and turned aside a late surge to beat Douglas Silva de Andrade by decision.

He’ll have a 1.5-inch reach advantage despite being the shorter of the two by an inch.

Murphy genuinely impressed me with his improvements from the Tukhugov fight to the Ramons one. Though he still gave up some takedowns, he kept up with an extremely adept submission artist on the ground and ultimately blew him away with ground-and-pound. He’ll need that same energy against Amirkhani, who’s taken down every single UFC opponent he failed to knock out in the first 10 seconds.

Even acknowledging that Amirkhani’s current skid isn’t as bad as it looks on paper, especially since he deserved the win against Kirk, I like Murphy to follow the usual anti-Amirkhani gameplan of, “wear him out by scrambling out from under him and then turn it on late.” Amirkhani could very well just smother or stop him in the first two rounds, but Murphy figures to take over as the fight progresses.

China’s Hu Yaozong (3-2) started his UFC career at Heavyweight, where he suffered a submission loss to Cyril Asker in Shanghai. He dropped to 205 pounds for his sophomore effort, a competitive loss to the overweight Rashad Coulter.

This marks both his Middleweight debut and his first fight in nearly three years.

Andre Petroski (6-1) emerged as a frontrunner on The Ultimate Fighter (TUF) 28 with a dominant submission of Aaron Phillips, only to fall to Bryan Battle in the semifinals. He returned to the win column in the Octagon itself, however, pounding out Micheal Gillmore to claim victory at the Finale.

His professional finishes are split 4/2 between knockouts and submissions.

Both the loss to Battle and comeback win over Gillmore showed that Petroski’s toolbox just isn’t deep enough; imposing as he is, he looks distressingly mortal when the takedown’s not there. That should give Hu some confidence, as “Totoro” has some very solid kickboxing offense. This is the same guy who gave up four of four takedowns to UFC washout Cyril Asker, though, so it doesn’t look like he’ll spend long enough on the feet to actually use those skills.

That’s not to say he couldn’t have shored up his takedown defense during his layoff, as he shares a training camp with such counter-wrestling monsters as Petr Yan, but that’s asking for a lot of faith in hypotheticals. Between his previous struggles, the rust, and the new weight class, there’s just too much standing in his way for me to give him my vote. Petroski drags him down and chokes him out in the first.

Prediction: Petroski via first round submission

Just about 2.5 years after suffering his first UFC defeat against Kevin Lee, Magomed Mustafaev (14-4) returned to action with a vicious spinning back kick knockout of Rafael Fiziev that earned him “Performance of the Night.” He’d spend the next 10 months on the sidelines before falling just short against Brad Riddell in Feb. 2020.

This will be the first fight for “The Sniper” in 19 months.

Kazakhstan’s Damir Ismagulov (23-1) followed his dominant run in M-1 with three consecutive UFC victories, including well-aged decisions over Joel Alvarez and Thiago Moises. Then came a nearly two-year layoff, which he ended in May 2021 with a dominant victory over Rafael Alves.

He’ll have two inches of height and three inches of reach over Mustafaev.

I’m not sure what UFC brass’ obsession is with pitting Ismagulov against dangerous finishers who won’t push him further up the ranks, but here we are again. Mustafaev is one of the scarier strikers in a division choked, a genuinely vicious kickboxer with some of the heaviest kicks of anyone below Middleweight. We all saw what he did to a standout in Rafael Fiziev, and he’s certainly got enough firepower to put Ismagulov away.

What he doesn’t have, however, is the wrestling to actually use that firepower. Ismagulov may not be anywhere near as flashy, but he’s patient, technically sound, and highly effective with his grappling. He’s more than skilled enough to defuse Mustafaev, whom the UFC really should have booked against another willing striker. Ismagulov makes it 5-0 with a composed, grind-heavy decision.

Though he lost his Fight Nights Global title to Zhalgas Zhumagulov in controversial fashion, Tagir Ulanbekov (12-1) continued down the road to the Octagon with three consecutive wins in GFC. His debut pitted him against surging Brazilian Bruno Silva, whom Ulanbekov overpowered on the mat despite taking some damaging low kicks in the first round.

He is the shorter man by two inches.

A 3-1 run, marred only by a split decision loss to Yuki Motoya, set up a “Contender Series” bid for Allan Nascimento (18-5) against Raulian Paiva. He once again emerged on the wrong end of a split decision, but recently ended a nearly three-year layoff with a submission victory.

“Puro Osso” has scored 13 submission wins as a professional.

Don’t let the lopsided odds fool you: Ulanbekov’s in for a fight here. Nascimento is as gritty as they come and has the technical prowess to match that toughness, boasting an aggressive striking attack and some top-notch scrambles on the mat. Ulanbekov’s going to have to earn every inch of ground he takes.

Luckily, that’s what he and the rest of his smothering stable are best at. Nascimento has struggled with lesser wrestlers than Ulanbekov in the past, making the Dagestani’s takedowns a virtual panacea for Nascimento’s versatile onslaught. He’ll have to mind his P’s and Q’s on the ground, but expect him to rack up long stretches of top control for a wide decision.