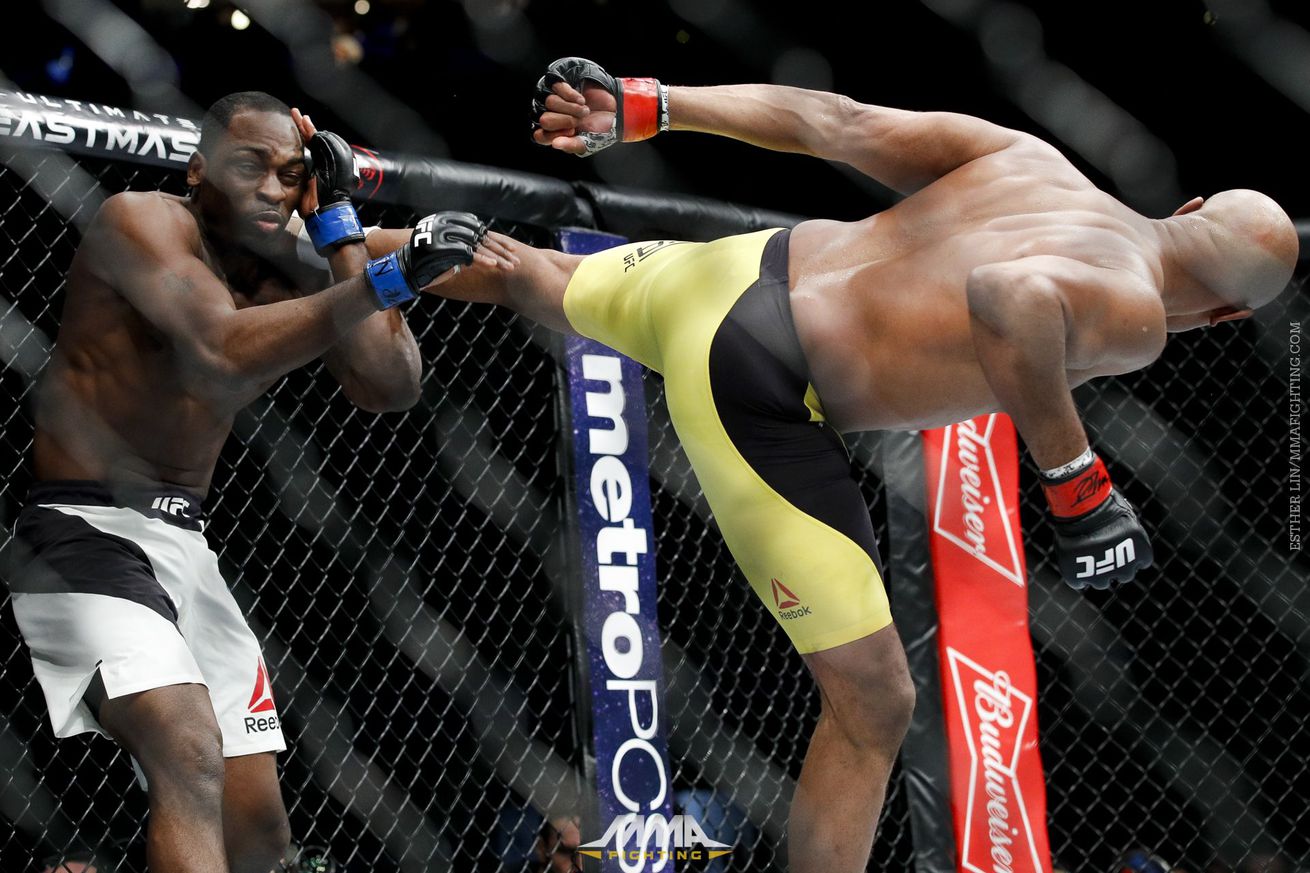 Few things infuriate MMA fans more than a fight being scored incorrectly, though the term “robbery” tends to be thrown around carelessly and is often steeped in bias. With Robbery Review, we’ll take a look back at controversial fights and determine whether the judges were rightly criticized for their decision or if pundits need to examine their own knee-jerk reactions.

Derek Brunson can’t win the big one. That’s the narrative that’s dogged the middleweight veteran throughout his UFC career, a nearly eight-year run that has seen him share the cage with Israel Adesanya, Robert Whittaker, Yoel Romero, and Ronaldo Souza, but fail to defeat any of them.

At UFC 208 on Feb. 11, 2017, in Brooklyn, Brunson nearly caught one of the biggest fish in all of MMA when he went three rounds with the legendary Anderson Silva. However, it wasn’t meant to be and rather than a signature moment for Brunson, we saw just the second decision win for Silva in seven years (the first if you disregard a five-round win over Nick Diaz that was changed to a no contest when Silva failed a drug test). To date, it is also the last time Silva won a fight.

Brunson was as disgruntled as you’d expect, stating that he “outclassed” Silva and later speculating that the judges were more impressed by Silva’s reputation than his actual performance. UFC President Dana White scored the fight for Brunson.

Was this a stolen moment for Brunson? Or did the judges have to make a difficult call? Let’s see how close Brunson actually was to boosting his resume with a victory over Silva.

What was the official result?

How did the fight go?

Even mired in a slump, Silva’s mystique was still present. Normally a fast finisher, Brunson didn’t even consider rushing Silva, one of MMA’s all-time best counter-strikers. Instead, he picked his spots with leg kicks and surprised Silva by punching his way out of the Brazilian kickboxer’s clinch. One major factor in the fight was how well Silva absorbs damage. There were no playful reactions to getting hit and you have to think he diminished some of Brunson’s strikes in the eyes of the judges with his gift for slipping punches.

Still, Brunson had a couple of meaningful flurries and ended round two in top position after a flying knee attempt by Silva. That’s one of the few times Brunson put Silva on his back as Silva’s wrestling defense was on point. Brunson landed a clean left two minutes in, but still fought carefully. He did score a key takedown to shut down a Silva rush. He also managed to hold Silva against the fence for long stretches of the second round, but moments of effective offense were rare. The round actually looked to be heading to a draw score before a Silva burst in the last minute might have taken it.

In between rounds, Greg Jackson told Brunson that he was giving Silva too much respect. On one hand, there was some truth to that because Brunson had success almost every time he opened up; on the other hand, he was fighting Anderson freakin’ Silva and one mistake could land him on a highlight reel.

Brunson seemed to take Jackson’s advice though as he came out noticeably more aggressive to start the third. Silva’s defense was great, but he let Brunson push him against the fence and continue to get the better of him in clinch situations. However, there were several close exchanges where Brunson fell just short of connecting with a power punch and Silva used his speed and counters to foil Brunson. A Brunson takedown with 90 seconds to go changed the complexion of the round, but even then it appeared to be more of a neutral position as opposed to one that Brunson scored a lot of points from.

There was a great show of respect from both fighters afterward. They probably knew it was a close one.

What did the judges say?

Derek Cleary and Douglas Crosby both scored the fight 29-28 Silva, while Eric Colon saw the fight 30-27 in favor of “The Spider.”

What did the numbers say?

Comparing the significant strike stats to the total strike stats, we can already see why there was room for controversy. Brunson had the slight edge in significant strikes 54-43, which is a decent margin in a three-round fight; however, it’s in the total strikes that he really must have felt blindsided as he won that category 118-54. Brunson looked like the busier fighter for much of the bout and the raw numbers back that up.

Counting significant strikes round by round though, one can understand why the judges may have struggled with this one. Brunson outlanded Silva 20-8 in the first round, but the next two rounds were a virtual stalemate, with Silva having the slight edge in round two (10-9) and the fighters tied up in round three (25-25). Brunson’s total strike count (60 of 94) in round three suggests that he heeded coach Jackson’s advice to push the pace.

Brunson scored takedowns in rounds two and three, but the ground strike battle actually narrowly went in Silva’s favor by a score of 5-2. That’s not to say Silva won the ground battle, only that Brunson definitely didn’t even if he was in top position.

What did the media say?

Media scorers were overwhelmingly in Brunson’s favor, with 20 scoring it for him and just four for Silva. Eight went as far as to score the fight 30-27 for Brunson.

What did the people say?

Voters on MMA Decisions were fairly split, with the two leading tallies being 29.5 percent for 29-28 Brunson and 27.9 percent for 29-28 Silva. However, another 26.4 percent scored the fight 30-27 Brunson, a relatively large number given the actual scores.

On the Verdict MMA app, voters were at odds with the judges insofar as them believing that Brunson’s round three performance was actually his most convincing of the fight.

This is the data from the Global Scorecard for Silva's fight against Brunson. Silva edged Brunson two rounds to one, but Brunson had the overall higher final score. pic.twitter.com/W9WZyNugnc

That scoring system takes the cumulative total of every submitted fan score (filtering out aberrant scores like random 10-7s if they comprise less than one percent of the total) in every round and divides by the amount of submitted scores to determine the winner of each round and also in totality.

The Verdict MMA results don’t reflect too poorly on the judges as the final margin of victory by Brunson was just four points, a sure sign of a close contest, and fans actually slightly leaned towards Silva in the first two rounds.

How did I score it?

For the life of me, I can’t see how anyone scored the first round for Silva. Brunson landed the harder-looking shots, more strikes overall, and avoided all of Silva’s fancy stuff. Unless we’re suddenly rewarding points for style and stuffed takedowns, Brunson at least has a valid complaint that he was robbed of a clear 10-9 lead after round one.

After that, it gets trickier, but I still think Brunson won round three and should have walked out with a 29-28 victory. If only he could have been a little busier, a little more urgent in the final five minutes, it could have made things a lot easier for the judges and himself at the end of the night.

Was it a robbery?

I feel strongly that Brunson won this one and yet there is too much statistical and anecdotal evidence to ignore. Brunson simply needed to do more, which is easier said than done when you’re in the cage with arguably the greatest UFC fighter of all time.

All the traits that won Silva fights in the past such as his pinpoint countering and ability to minimize damage were on display against Brunson, it just didn’t end in a vintage knockout. He even showed improved takedown defense and his Brazilian jiu-jitsu effectively neutralized Brunson’s top game. He did more than enough not to lose, which isn’t exactly the most stirring endorsement, but it does take the sails out of the robbery talk.

As for Brunson, he showed once more that he has the skills to compete with the best at 185 pounds. He just didn’t convincingly beat the best ever at 185 pounds on this day.