Rogan: McGregor Did Enough PEDs To ‘Melt That USADA Cup’ 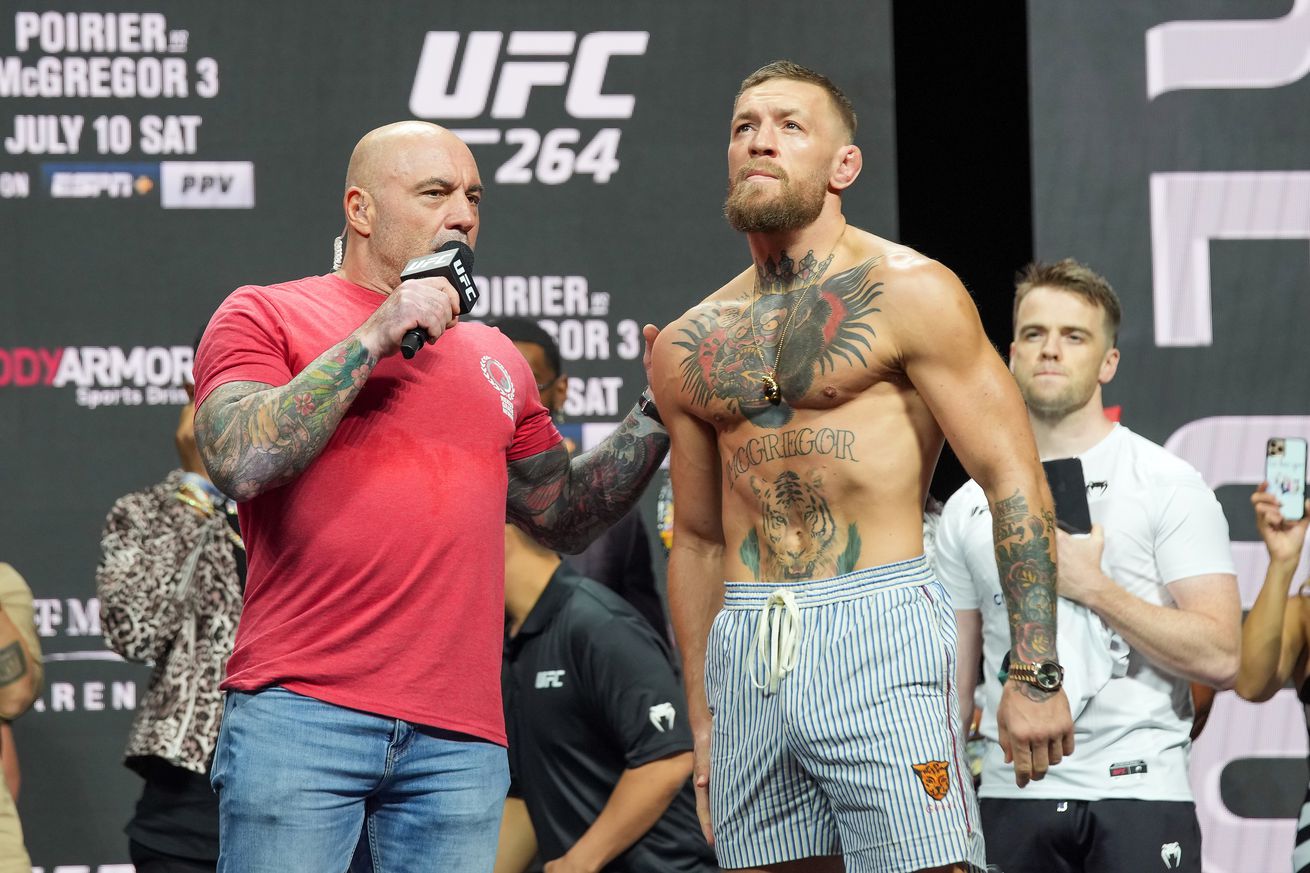 Conor McGregor is almost done recovering from a horrific leg break injury and looking to get a fight booked in February 2023. Now the big question is whether USADA will force him to wait another six months as he re-integrates into their drug testing pool, or if “The Notorious” will earn a special exemption from that process.

McGregor’s injuries were certainly serious enough to justify pulling the fighter from drug testing so doctors could throw every regenerative treatment available at the leg. And in theory, we can agree that athletes coming back from year plus injuries shouldn’t have to sit out an extra six months. But in reality, you just have to look at McGregor’s rehab physique to know why he doesn’t deserve an exemption. The dude is jacked. Yoked. And not natty, according to bro scientists across the internet.

Joe Rogan didn’t dance around it on the latest episode of The Joe Rogan Experience. He had on PED expert Derek from ‘More Plates More Dates,’ and they discussed McGregor’s 20+ pound muscle gain extensively.

“He’s taking his shirt off and posing constantly and he looks like his piss would melt that USADA cup,” Rogan said. “Like it would just like burn a hole right through the bottom of that USADA cup.”

“I did a whole deep dive video on what I think he could be doing,” Derek said. “And I think for any individual that doesn’t pass the eye test, he’d definitely be one of those individuals. But I wouldn’t boil it down to that, he could be a hyper-outlier individual for sure. And I would never want to make a definitive statement. I think it’s highly probable that he’s done certain things for sure.”

Derek noted that McGregor had recently made some curious comments regarding the USADA withdrawal.

“It almost seemed like he was justifying drug use at some point,” he said. “He was like ‘You don’t know what this is like.’ ‘I took myself out of the [USADA] pool, everything’s on board.’ And it was very suggestive of ‘This was within the rules and I had to do it, and f— you if you don’t agree with my decision.’”

“The weird thing is that there is a loophole in USADA that allows you to get out of the testing pool,” Rogan said. “It seems weird and you just need six months. If someone had an injury though, that’s a very wise way to approach it right?”

“HGH, peptides, androgens are very restorative, like they’ll reinforce bone mineral density,” Derek said. “Like, there’s certain stuff that’s going to stay in the system for a long time he could never use, but anything pro-bone integrity, I would be highly incentivized, if I was him and I wasn’t being tested, I’d be pushing that vector hard.”

It remains extremely unclear how the UFC and USADA will handle McGregor’s return. If he re-enters the USADA testing pool in February but doesn’t get an exemption, that means no McGregor until August 2023. That’s certainly not going to make ESPN and Disney too happy, given how much McGregor has spurred subscriber growth every time he fights.

In the end the UFC has the final word on granting an exception or not, so it’s really up to them. While we’d typically expect them to lean in favor of whatever makes them the most money, they don’t want the whole situation to turn into a massive mainstream sports scandal.

Derek from More Plates More Dates knows all about how big steroid scandals can be. He recently outed “The Liver King,” a natural supplement pushing social media influencer who claimed to be PED-free. Well, it turns out the dude spends thousands of dollars a month on a kitchen sink worth of HGG and other drugs.

That guy was just a carny side show and Derek’s video exposing him generated millions of views and headlines around the world. Now imagine the media storm if the UFC gives Conor McGregor a pass on drug testing when he’s failing the eye test ... not as badly as “Liver King,” maybe, but still failing none the less.