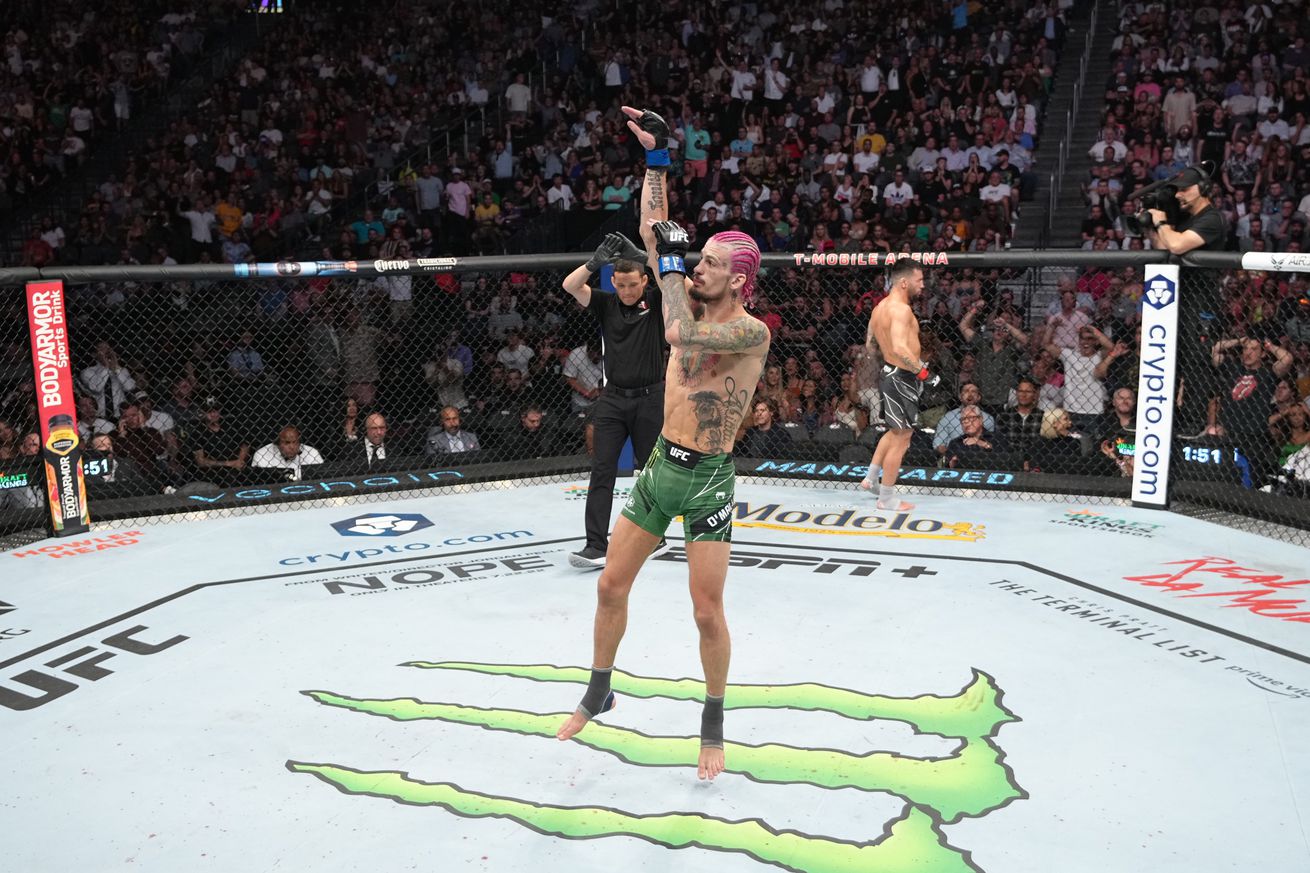 Sean O’Malley celebrating his no contest against Pedro Munhoz at UFC 276. | Photo by Jeff Bottari/Zuffa LLC

Sean O’Malley fought to a “No Contest” with Pedro Munhoz at UFC 276.

Sean O’Malley came into last night’s UFC 276 on the back of a 15-1 record and a whole lot of talk. Waiting for him there was Pedro Munhoz, the most accomplished opponent “Suga” had ever faced.

O’Malley met Munhoz, the ninth ranked bantamweight on the roster, despite his oft-repeated stance that he was only interested in fighting highly ranked fighters after he had gotten off his entry-level UFC deal. The Contender Series standout was unabashed in his acceptance of Chael Sonnen’s advice to, “fight the worst guy on the best spot on the card.”

The 27-year-old definitely had a good spot on the card last night. He opened the pay-per-view; one which featured two title shots, a legend of the sport, and one of the most exciting prospects in the promotion.

But, despite having that spot, and the opportunity to beat a tough opponent that could launch him into the Top 10, O’Malley faltered. And the fight itself failed to generate a winner. Instead, O’Malley’s record gains an odd looking set of parenthesis wrapped around the letters “NC.” 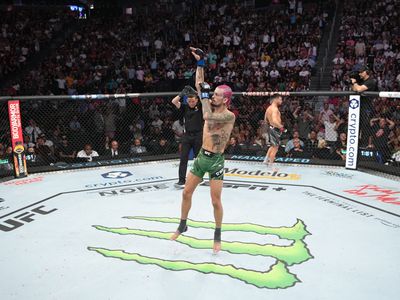 Photo by Jeff Bottari/Zuffa LLC
Sean O’Malley celebrates his no contest against Pedro Munhoz at UFC 276.

Plenty of storied fighters have kinky records with sprinklings of no contests, draws and DQs. However, for this NC context is the key.

The bout, due to its ending, will likely be forgotten and certainly won’t count as a loss on O’Malley’s official record. Though, as far as O’Malley’s upward trajectory is concerned — it might as well be an “L.”

Last night, O’Malley looked a step behind Munhoz. The Brazilian harried O’Malley from the get-go, taking the center of the Octagon and landing almost every leg kick he threw to slow down and confound O’Malley.

Official stats show that Munhoz only landed one more strike than O’Malley (though he was 10 percent more accurate). But, it was plain to see Munhoz’s offense was wearing on O’Malley’s in a way that was not reciprocated.

Two of the three cageside judges felt this was the case, scoring the first round 10-9 in favor of Munhoz. 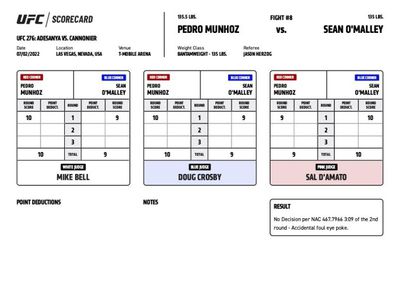 The most notable contributions from O’Malley in the fight, which only lasted a round and change, were two illegal blows. In the first he caught Munhoz with a front kick right between the legs. Fortunately it didn’t require too much recovery time.

In the second, O’Malley stuck his fingers all over Munhoz’s face, making enough contact with the eye that the fight needed to be called off.

These things happen in combat sports. That being said, two fouls in such a short amount of time isn’t a great look. At best, this was careless from O’Malley. At worst, it represents a lack of precision and technique. Let’s stop short of saying any of this was intentional, though.

Rightly, the fight was called a “No Contest” after Munhoz was rendered unable to safely compete. It was a disappointing end to the bout ... at least for most of us.

After the doctor told referee Jason Herzog that the fight had to be stopped, O’Malley treated us to his signature victory celebration — the step-back fade-away jumper à la Kobe Bryant.

Does O’Malley think this counts as a win? We’ve seen some fighters confused when a fight gets called off like this, thinking they may have scored a technical knockout. But, it seems unlikely that O’Malley didn’t realize the doctor was checking the result of an accident foul, something which was never going to lead to his hand being raised.

The self-hype in the lead-up, the loss on the scorecards, the annoying fouls and the delusion of winning (whether it’s genuine or kayfabe) all add up to a pretty unsatisfying night for O’Malley.

Of course, O’Malley needs to sell this fight as a victory.

In 2021, before he fought Raulian Paiva, he said he has three fights left on his contract. If that’s true, that means he has one fight left now. That’s when the UFC likes to negotiate a new deal.

A bona fide win over Munhoz would have given O’Malley a strong hand at the negotiating table and a springboard for taking on big names for big cheques. A loss would have been great for UFC, when it comes to keeping O’Malley in check and withholding what it can easily afford. A “No Contest” ... certainly seems to favor the Endeavor side of this equation.

So far, in his UFC career, O’Malley’s shown a level of business sense that is unlike many of his cohorts on the roster. He’s had a solid plan that, if executed perfectly, could have seen him progress up the rankings and, more importantly, get that bag.

However, last night — just like he does during his jump-shot celebration — O’Malley took a step back.