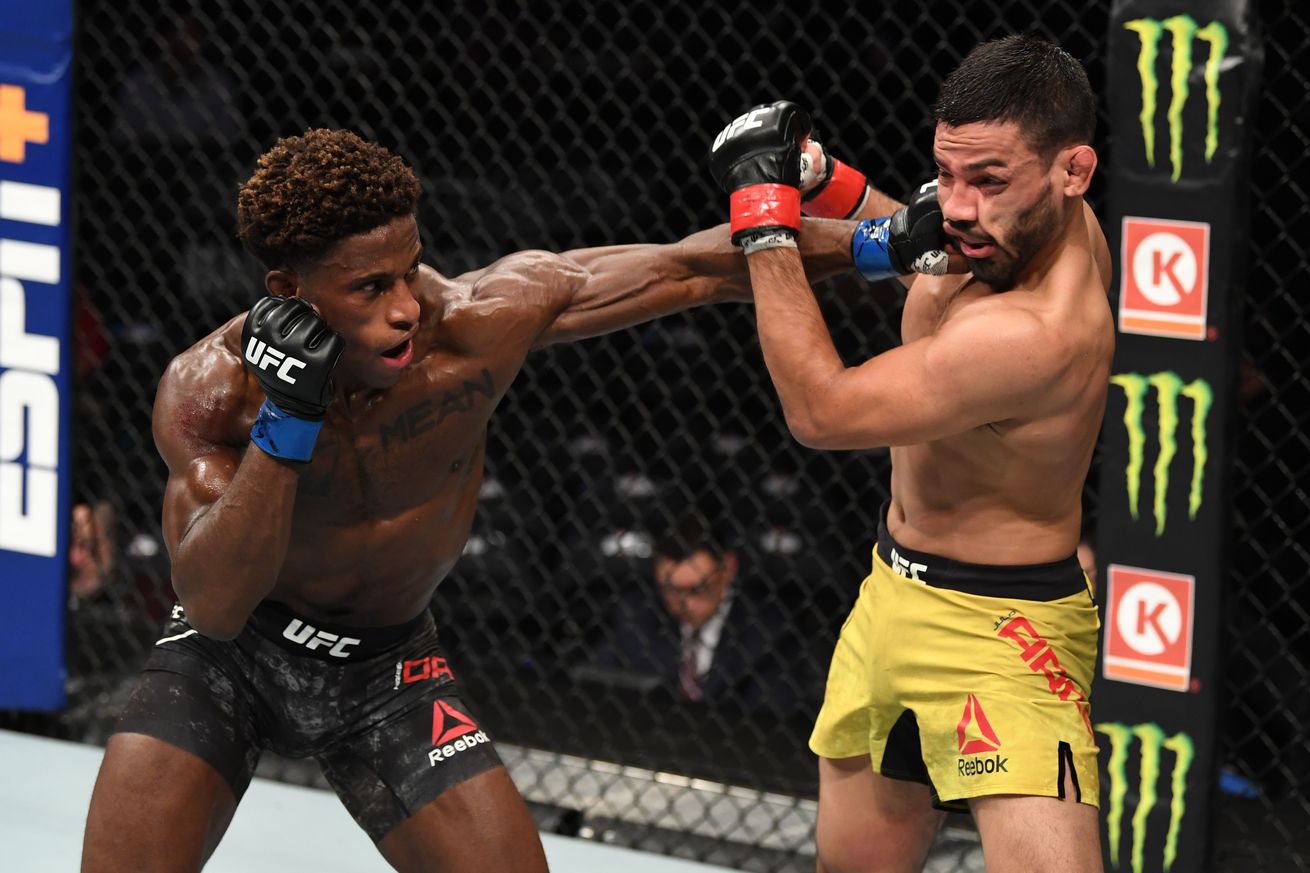 There are a lot of talented fighters at 145 pounds, which is perhaps the reason Dawodu hasn’t gained as much momentum as is deserved. The Canadian up-and-comer has won four straight, and he’s done so in style, brutally picking apart opponents with powerful kicks and aggressive punches. Tukhugov is perhaps best known for his connection to Khabib Nurmagomedov and participation in the post-McGregor brawl (watch it). Inside the Octagon, Tukhugov hasn’t fought all that often, but he can still be trusted to pursue the knockout himself.

Let’s take a closer look at the keys to victory for each man:

Record: 11-1-1
Key Wins: Julio Arce (UFC 244), Kyle Bochniak (UFC 231), Steven Siler (WSOF 35)
Key Losses: Danny Henry (UFC Fight Night 127)
Keys to Victory: Dawodu is one of the more pure Muay Thai-style fighters on the UFC roster. Everything he throws is compact and powerful, and he likes to slowly walk his opponents down until he power becomes overwhelming.

Seven of his victories come via knockout.

Dawodu’s nickname “Mean” is both accurate and important here. When he’s in the zone, Dawodu really has a punishing style, kicking to the legs and ripping body shots to an overwhelming degree. At times, however, it can take a round or two for Dawodu to really find his range and release his combinations.

Against Tukhugov, how quickly Dawodu turns it up could determine the difference between victory and defeat. His Dagestani opponent is impressively powerful with both punches and takedowns, but he definitely slows down over the course of the fight. Assuming neither man lands the knockout punch early — which is possible for either side, but much more difficult to control — Dawodu will likely take over at some point.

But will it be enough? If Dawodu is pushing the pace and working the body/legs, this will prove to be a physical and exhausting fight, which only improves the odds that Tukhugov fades earlier.

Against a pretty classic Muay Thai fighter, mixing in the takedown seems like a smart idea here. In general, Tukhugov is at his best when incorporating the takedown anyway — after all, those winging power shots are more likely to land if the level change feint is a credible threat.

Beyond that. the takedown gives Tukhugov a chance to rest. If he’s able to gain a good top control position and score some riding time, Tukhugov will remain dangerous deeper into the fight. As explained above, his issues only really come when he fatigues, so avoiding that problem will help him keep the fight in his wheelhouse.

Featherweight is a crowded division, and only one of these men can take a step forward.

There are reasons to believe that either man can excel at 145-pounds and grow to be a contender. Dawodu’s Muay Thai is downright nasty, and he’s a very physical powerful fighter. Tukhugov is a knockout threat with excellent wrestling — sounds like a recipe for success!

Ultimately, this pay-per-view (PPV) opener is an opportunity for one of these men to really stand out and make their case for a Top 15-ranked opponent. Otherwise, only a serious highlight reel knockout or crazy win streak will enable them to break apart from the hyper-talented middle of the division.

Consequently, a loss stalls the defeated man’s momentum, likely keeping them in that middle position for at least a few more fights.

At UFC 253, Hakeem Dawodu and Zubaira Tukhugov will open the main card. Which man will earn the victory?