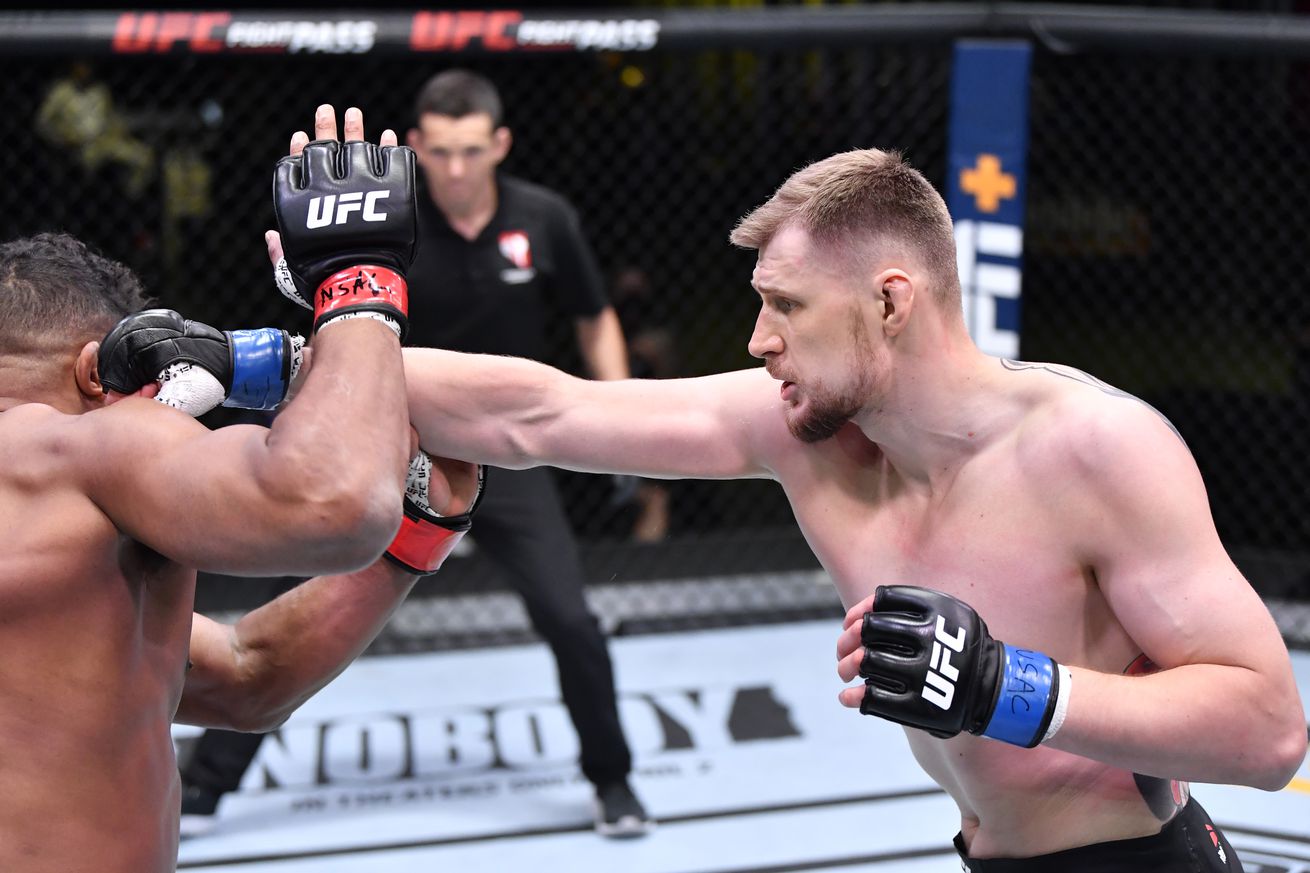 Since joining UFC’s roster in 2016, Volkov has quickly proven himself among the best Heavyweights in the world. Unfortunately, he’s struggled against the division’s elite, as his last three losses come to fighters currently ranked inside the Top 5. Meanwhile, Tybura has seen ups-and-downs inside the Octagon, but he enters this contest riding an impressive five-fight win streak. He’s earned another shot at a high-profile opponent, as a win here could really propel Tybura back into the title mix for the first time since 2017.

Let’s take a closer look at the keys to victory for each man:

Record: 33-9
Key Wins: Alistair Overeem (UFC Vegas 18), Fabricio Werdum (UFC 229), Walt Harris (UFC 254), Stefan Struve (UFC Fight Night 115), Blagoy Ivanov (Bellator 120)
Keys Losses: Ciryl Gane (UFC Vegas 30), Curtis Blaydes (UFC on ESPN 11), Derrick Lewis (UFC 229), Vitaly Minakov (Bellator 108)
Keys to Victory: Volkov is a high-volume, rangy kickboxer who looks to break opponents down with pokes to the body before closing in with combinations. Much has been made about Volkov bulking up in the last year or so, and he certainly does seem to be hitting harder as a result.

He’s stopped 22 of his foes via knockout.

Volkov has fought a fair amount of opponents like Marcin Tybura. The Polish athlete is well-rounded and tough, but in this match up, it’s pretty clear that he’s going to be searching for the takedown. To avoid getting stuck beneath “Tybur,” Volkov has to choose his shots wisely to maintain his range advantage.

Volkov should be looking to stab his front kick up the middle whenever possible. More recently, Volkov has been stalking his opponent a bit more aggressively, and that seems like a good idea here. It can be difficult to shoot from the back foot, particularly when a fighter prefers to wrestle from the clinch compared to an explosive double leg.

It’s always important to kick with the rangier fighter. Tybura has some nice front kicks of his own, and if he’s throwing them, it will help him navigate the distance and score the clinch in the long run. For example, Tybura could throw a front kick then step into the opposite stance, which is a really effective way to crash into the clinch.

Ultimately, of course, the takedown is the goal barring an unexpected haymaker connection. To that end, Tybura would be better off changing levels and attacking Volkov below the waist. Tall fighters can typically be difficult to trip down to the canvas, but Volkov was off-balanced by Fabricio Werdum via the single leg dump on several occasions, so perhaps Tybura can recreate that success.

Whether single or double leg takedown, Tybura is more likely to get Volkov to the canvas if he goes below the waist.

One of these two experienced Heavyweights gets to look up the ladder rather than down.

Volkov is in a difficult spot, having recently lost to the newly minted interim champion Ciryl Gane in a rather definitive result. At the same time, if Francis Ngannou were to dispatch of “Bon Gamin,” well, Volkov is one of the few top-ranked Heavyweights who has yet to face “The Predator.” Alternatively, a win here could see Volkov in the cage vs. someone like Stipe Miocic while the interim title situation is solved.

On the other hand, this is a big opportunity for Tybura, a chance to score the biggest win of his career and potentially break into the Top Five. At 35 years of age, Tybura is likely in his prime — Heavyweights operate on a different timeline than most — so if he’s going to make a run at the top, now is the time! Like Volkov, a win here could see Tybura square off opposite a top contender like Curtis Blaydes or Miocic, or even a rematch vs. Derrick Lewis.

At UFC 267, Alexander Volkov and Marcin Tybura will throw down. Which man will have his hand raised?