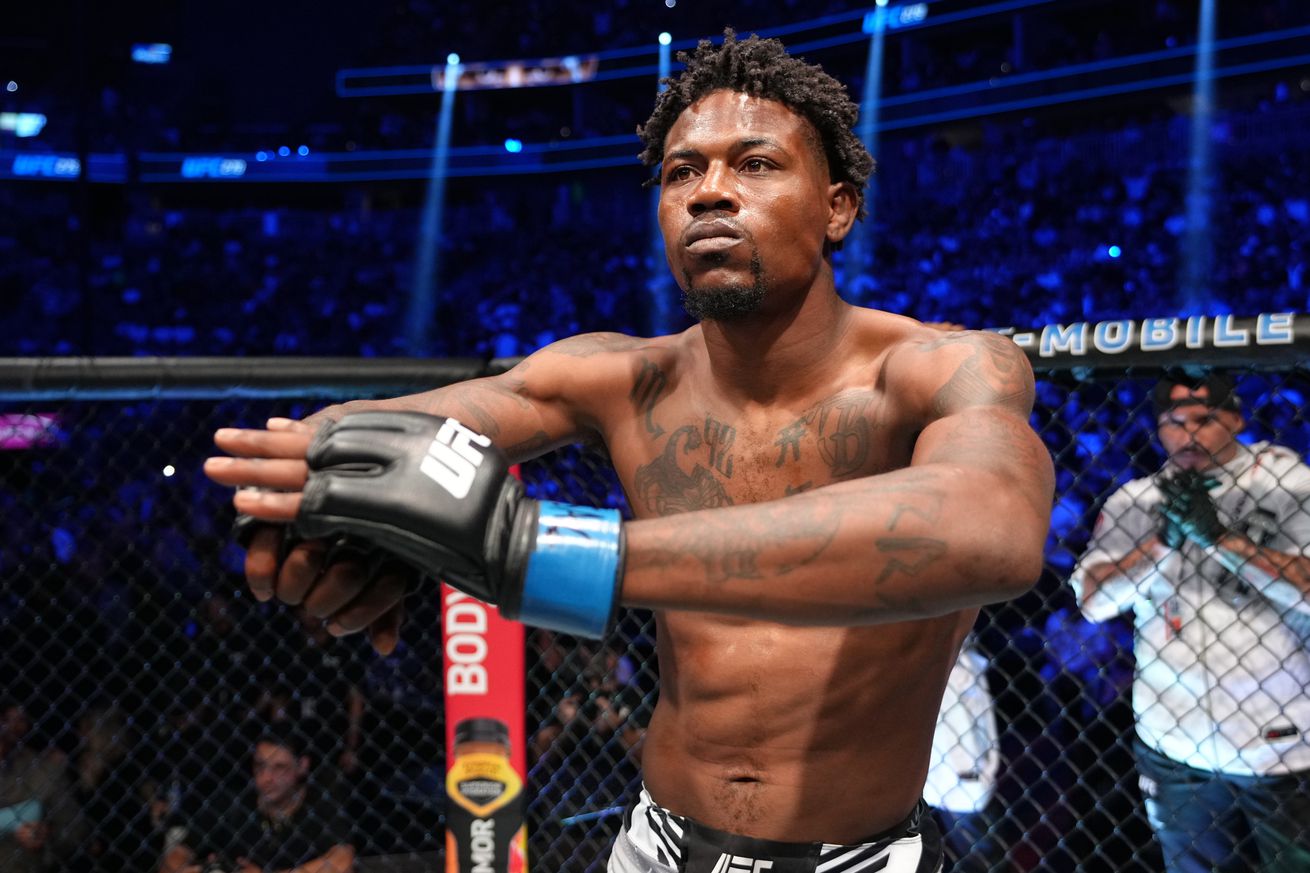 The UFC has put together a fine card for its first show in Orlando since 2018.

The last time the promotion was in “O-Town,” future PFL fighter Jeremy Stephens knocked out soon-to-be interim featherweight title challenger Josh Emmett in the main event, Sam Alvey was winning fights, and the UFC was still on FOX. A respectable card, but Saturday’s UFC Orlando lineup has it beat.

Longtime welterweight contender Stephen “Wonderboy” Thompson finds himself in another headliner, this time against the always animated Kevin Holland. It’s been a tough couple of years for Thompson, who has fought infrequently and struggled when he has. He is coming off of back-to-back lopsided decision losses to Belal Muhammad and Gilbert Burns.

Thompson, a two-time UFC title challenger, still holds the No. 10 spot in the MMA Fighting Global Rankings, but the 39-year-old has been hanging onto that ranking by a thread and Holland could be the man to take it. “Trailblazer” has impressed since dropping down to 170 pounds (outside of an unanticipated catchweight bout against Khamzat Chimaev at UFC 279). A win over Thompson guarantees a number next to his name.

Where: Amway Center in Orlando, Fla.

At 170 pounds, Kevin Holland hasn’t lost any of the striking creativity and finishing power that made him a top 10 middleweight contender. He has a considerable advantage in length and youth as well, which has me leaning in his direction for this pick.

Stephen Thompson remains one of the most confounding puzzles to solve in MMA, particularly if you’re a striker. By now, the secret is out that if you have a potent wrestling game, then you can ground “Wonderboy,” so if Holland can put any emphasis on his offensive grappling now would be a good time to start. However, Holland’s submission opportunities typically arise from his striking so it would be somewhat surprising to see him focus solely on taking Thompson down.

So why go with Holland? Size matters. Age matters.

Thompson has lost one decision to another standup fighter, current middleweight Darren Till. That fight was tough to watch and, regrettably, fans could be in store for a similar game of inches on Saturday. Holland can generate some incredible bursts of offense when he finds the range and as difficult as that is to do against Thompson, I’m expecting Thompson to be a step slower than the fighter who befuddled Geoff Neal and Vicente Luque a few years ago. A step that will make all the difference.

Look for Holland to drop a round or two to Thompson before turning it up in Round 3 en route to a convincing decision win or possibly a late finish.

Let me start by saying that I love Bryan Barberena’s current matchmaking strategy. After earning a decision win over a bona fide legend in Matt Brown, he followed that up by punching out former UFC welterweight champion Robbie Lawler and could now add another former UFC champion to his hit list with Rafael dos Anjos. Even though “RDA” was a champ in a lighter division, that would still be a hell of a three-fight run for Barberena.

Unfortunately for Barberena, dos Anjos is just better at mixing the martial arts than he is.

While Lawler has the kind of fighting style that was destined for diminished returns as he grew older, dos Anjos could be schooling lower tier fighters for years to come with his diverse skill set. Barberena isn’t the biggest welterweight either, so dos Anjos shouldn’t have much trouble engaging him in a boxing match or taking him down if the situation arises.

Barberena is a busy striker, but doesn’t have the kind of one-shot power that should have us worrying that dos Anjos is about to become a sudden fall risk like Frankie Edgar or Marlon Moraes. That day may come for dos Anjos soon, it just won’t be on Saturday.

Look for dos Anjos’ performance to be closer to Raphael Assuncao’s recent schooling of Victor Henry, another comfortable decision win for a Brazilian veteran.

Nicolau is one of the most underrated contenders in the UFC’s flyweight division, though it’s somewhat understandable given that he’s more known for his steady performances than his explosive output. The Ultimate Fighter: Brazil 4 standout has won five straight fights and 11 of his past 12, getting past the likes of past title challengers Tim Elliott and John Moraga, and former RIZIN champion Manel Kape.

He’s methodical and won’t be rushed, though Schnell certainly has the toughness and experience to test that approach. If Schnell can make this one ugly, he might be able to take Nicolau outside of his comfort zone, but Nicolau is just so solid with his hands and controls distance masterfully. On the ground, I favor Nicolau as well.

If Nicolau wants to make a championship statement and win some fans, he’ll take a few risks and bring the fight to Schnell; if he just wants to take care of business as usual, he’ll just keep fighting like Matheus Nicolau.

I’m gonna tell you something: I think Tai Tuivasa might be the new Derrick Lewis.

For years, Lewis was the always dangerous top 5 gatekeeper at heavyweight. Good enough to knock out anyone outside of a handful of names, good enough to earn a title shot, not quite good enough to win it all. That sums up where Tuivasa is at this point in his career and I believe when he knocked Lewis out two fights ago, the gatekeeper torch was passed on to a more-than-worthy successor.

So it falls upon Tuivasa to avenge his brother in swangin’ and bangin’, with Sergei Pavlovich also coming off of a recent win over Lewis.

All of this is to say that we’re talking about a matchup of heavyweight sluggers here and I cannot predict with any confidence who is going to win this one. I’ve said that Tuivasa has been overlooked as a serious contender and he proved that in defeat with a thrilling effort against Ciryl Gane, an opponent that he was given little chance against on paper. But Pavlovich is legit, a Russian machine who has just been walking through the opposition. He has everything it takes to be UFC champion in 2023.

My heart says Tuivasa because I don’t want to believe that the good times are done rolling. My gut says Pavlovich. I’m going with my gut.

There’s no questioning that Roman Dolidze goes in there to finish, but he’s facing a huge step up in competition in Jack Hermansson and on short notice no less.

Dolidze is so aggressive, even off of his back, which is both a plus and a minus when calculating his chances of beating Hermansson. His willingness to fight on the ground could come back to bite him as Hermansson is a nasty finisher on the mat himself. Expect some aesthetically appealing scrambles in this one as both look to snatch a neck or a limb.

On the feet, Hermansson’s reach and durability gives him the edge, though Dolidze is yet to be finished in his 12-fight career. Again, I view Hermansson as a considerably more difficult challenge than Dolidze has faced so far, one that would greatly affect how I gauge Dolidze as a future contender.

Even in defeat, I still think Dolidze has a ton of potential as he’s relatively young in MMA years. So even though I’m going with Hermansson to snatch a submission in a fun fight, Dolidze should consider this a learning experience.

Eryk Anders has always had all the tools to be a factor at 185 pounds, but he’s rarely been able to put them all together. In comparison, Kyle Daukaus knows who he is, a submission specialist, and he knows to go to that skill as early and and as often as possible.

There’s a clear path to victory here for Anders, one that sees him stuffing takedowns and stifling submission attempts until Daukaus tires and becomes vulnerable in the second half of the fight. However, Daukaus is such a strong grappler that I don’t see Anders being able to last long enough to implement that game plan. Anders is effective on the feet, but doesn’t have the kind of power that will scare Daukaus off. Daukaus muscled his way inside, takes Anders down, and goes to work.

It might take a round or two, but Daukaus wins by submission.