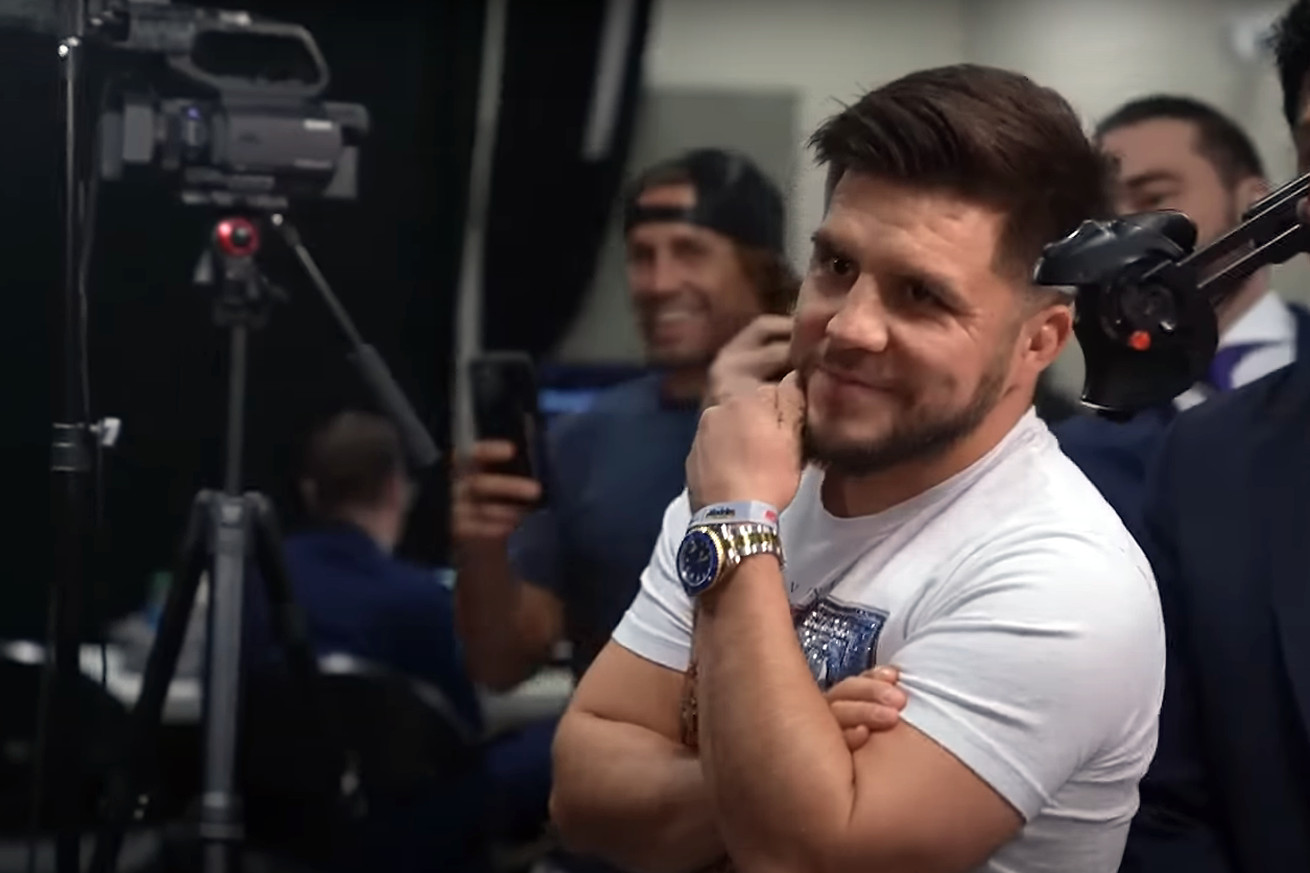 Henry Cejudo went on a call-out rampage backstage at UFC 276, and Sean O’Malley wasn’t impressed with his ‘cringey’ behavior.

Henry Cejudo had a busy UFC 276 fight week. The former UFC flyweight and bantamweight champion has spent the past year calling fighters out on Twitter, and now he took advantage of International Fight Week to confront as many people as possible in person, in typical cringe-inducing fashion.

Our favorite example of this came backstage during UFC 276, where Cejudo interrupted a post-fight interview between BT Sport and Sean O’Malley. Watch the exchange, which as Twitter user “Jeffgotjuice” mentioned looks exactly like something you’d see on The Office.

This legit look like a scene out of The Office . pic.twitter.com/rF8Xq1ua9U

“I’d love a tune-up. What do you say, Precious?” Cejudo yelled from off-camera. “I’m good to go. When would you want to bend the knee, at what time? Because I think you absolutely suck. Go on, carry on with the interview, go ahead.”

“What do you weight?” O’Malley replied. “That guy’s cringey. No one takes that dude serious. Look at him, he’s smiling, laughing. Not even taking it serious. Get that little person out of here! That dude’s all talk. How long has he been talking about coming back to fight. I don’t know. He’s not relevant and he tries to hard to get views and build a character and nobody cares, so what does he do? He comes after the most popular guy in the division. We’ll see where it goes.”

“Looks like he’s on drugs. Looks fat. Maybe having a midlife crisis.”

“That little fat ass should stay retired,” O’Malley said. “He’s running around drunk in the backstage, got escorted out, he was tripping over things, running into things. Looks like he’s on drugs. Looks fat. I don’t know if he’s having a mid-life crisis or what. He mumbled some words like that, is anyone realistic? Does Henry come back? He looks fat as s—t, what, does he want to fight in three years?”

Cejudo announced plans to un-retire and re-enter the USADA pool back at the start of April. If he filed his paperwork promptly, that means he’ll be eligible to fight in October after the UFC’s mandatory six month drug testing period. The former Olympic gold medalist and champ-champ also has to work things out with UFC brass. Dana White has a particular hate-on for champions that drop UFC belts, and Cejudo dropped both the 125 and 135 pound belts over pay disputes with the company.

Let’s hope Cejudo and his manager Ali Abdelaziz are working as hard on smoothing things over with the UFC as Cejudo is calling out fighters. In addition to the O’Malley incident, “Triple C” also got into a confrontation with current bantamweight champ Aljamain Sterling that ended with Henry shoving Aljo.

I’m ready right now Alja-shit stain. Gimme ALL the smoke. You can’t run away forever. You have something that’s mine. Spit shine it nice and pretty for me in the meantime. Triple C is back baby! #TheRealChamp pic.twitter.com/D4WPFUCpLG

Cejudo was more respectful when cornering Alexander Volkanovski and making a case for a fight with “The Great.”

What do you think, Maniacs? Is this just Henry shooting his shots, or is “The King of Cringe” back in full force?