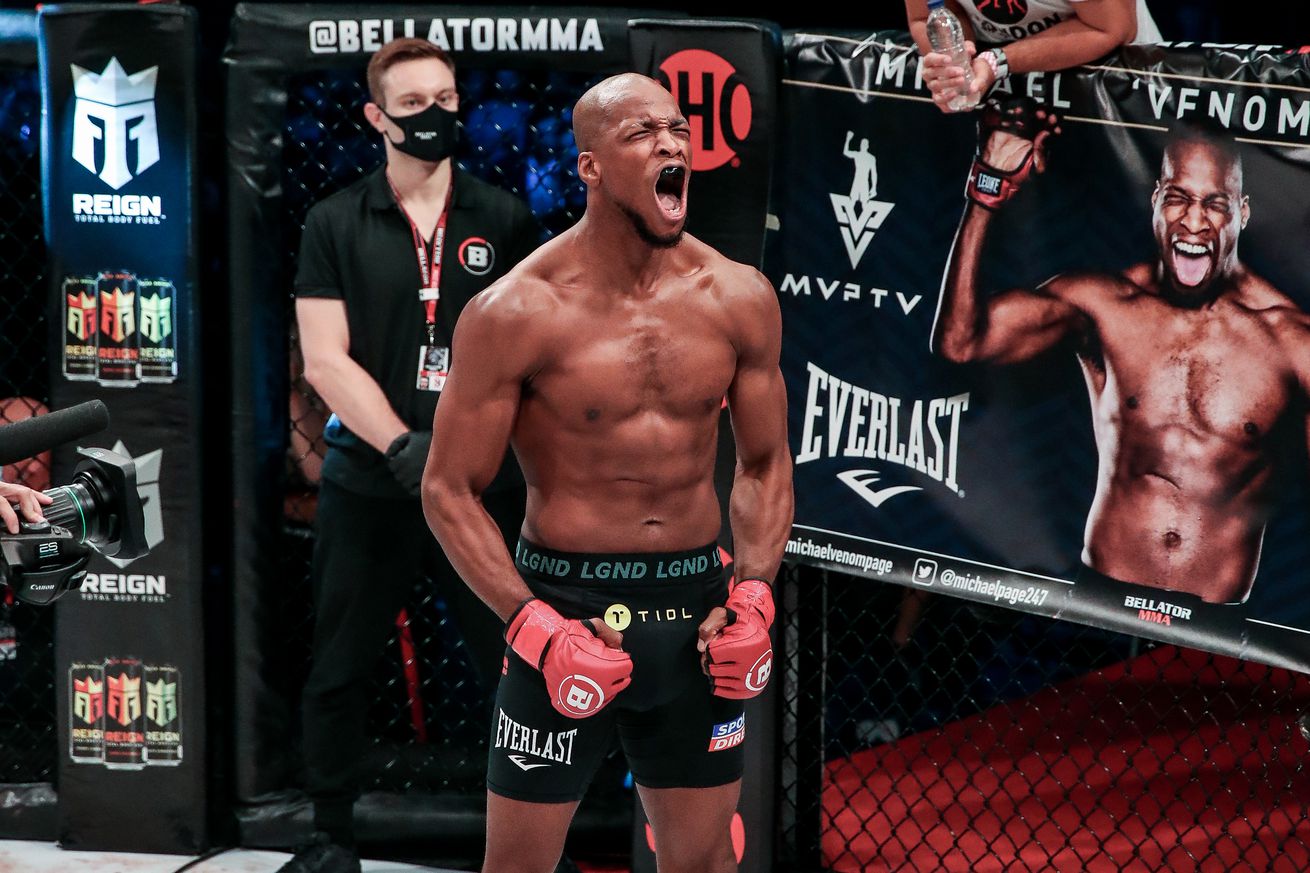 Bellator 281 is set to go down TODAY (Fri., May 13, 2022) live from inside OVO Arena Wembley in London, England, featuring an interim Welterweight title fight between Michael Page and Logan Storley. Also on the card, Lyoto Machida battles Fabian Edwards, while Paul Daley takes on Wendell Giacomo in his retirement fight.

Bellator 281’s “Prelims” undercard will air on Showtime at 1 p.m. ET, with main card action beginning at 4 p.m. ET. MMAmania.com will deliver results for the full card and comprehensive play-by-play for the televised portion of Bellator 281 below.

Many readers check in before, during and after the fights to share their thoughts on all of the action. Feel free to leave a comment (or 281) about the bouts and chat with all the other Maniacs during the show — it’s always a lot of fun!

Round 1: Kieholtz comes in and stuns Watanabe with a right hand from the jump. Watanabe grabs a hold of Kielholtz and drags her to the ground. Smart move because she was on wobbly legs. Kielholtz looking for an armbar. Watanabe now in gaurd. Watanabe now takes Kielhotlz’s back. Looking for a rear-naked choke. There was not a ton of action in this round but Watanabe gets it for controlling the pace. 10-9 Watanabe

Round 2: Watanabe goes in and lands the early takedown. Kielholtz reverses quickly and is now in top position. Hammerfists from Kielholtz. Pause in action because Kielholtz kicked Watanabe to the face when they were both on the ground. The ref takes a point from Kielholtz. Watanabe gets the same position and now has Kielholtz’s back. She is looking for a rear-naked choke. Kielholtz escapes but she is now in a tangle choke. Not a good position and a great transition for Watanabe. Kielholtz is in trouble and she taps! WOW!. Impressive performance from Watanabe.

Round 1: Stiff jab from Daley. Giacomo wraps him up and pushes him up against the fence. Giacomo trying hard for the takedown, Daley defending well so far. Giacomo gets the takedown but Daley pops back up to his feet. Giacomo hangs on and drags him back down. Giacomo looking for a rear-naked choke and Daley escapes. Giacomo is now in mount, side control. Daley gets back to his feet but Giacomo drags him back down rather easily. Daley somehow reverses position and he is now in Giacomo’s guard. Daley drops a huge bomb and Giacomo is now looking for a leg lock. Daley trying to escape and Giacomo has a heel hook. Stalemate at the moment. 10-9 Giacomo

Round 2: Jab from Giacomo. Right hook lands for Daley, and eats a leg kick to the shin. Dale lands an overhand right and then a flying knee. Giacomo again goes for the takedown and he gets it. Smart move, Daley was starting to get some rhythm on the feet. Giacomo landing some shots to the side of the head, nothing major but scoring points. Daley trying to grab the wrists and stand up. Giacomo draped all over Daley’s back. Daley simply can not get up. Not the most exciting, but a smart gameplan by Giacomo. Giacomo looking for a rear-naked choke and Daley reverses position and is now in guard. Nice elbow for Daley and a huge left hand rocks Giacomo. Giacomo stands up and Daley lands a huge right hand that knocks Giacomo clean out!!!! What a knockout!

Round 1: Biyong lands a stiff jab. Right hand from Biyong, who pushes trainer up against the cage. Trainer bleeding from his nose already. Biyong gets the takedown and is in half guard. Struggle for position on the ground. Biyong driving some hard shots to Trainer’s ribs. Wrist control now for Trainer. Biyong keeping him down for now. Trainer manages to get back to his feet and he now takes down Biyong and he takes his back! Trainer looking to flatten out Biyong. Trainer is blasting away with shots to the side of the head. He sinks in a rear-naked choke. Biyong defending well and is now eating more shots. Trainer goes back to the rear-naked choke. He lets it go. Trainer goes back to it one more time and Biyong is defending well. Trainer isn’t giving it up as time runs out. 10-9 Trainer

Round 2: They meet in the center of the cage. By the way, these two men are giants standing at 6’6. Biyong clips Trainer with a huge right hand. Biyong swarms in and starts unloading hammer fists but Trainer is defending well. Biyong mounts Trainer and he is in trouble. Biyong dropping wild hammer fists. Trainer is firing off some shots from the bottom as well. Biyong looks like he gassed himself out a bit. Nice elbow from Biyong and Trainer is bleeding bad. Biyong taking a breather, and still has top-mounted position. Trainer gives up his bak and Biyong is looking for the rear-naked choke. Trainer escapes and he is now in Biyong’s guard. Nice elbow from Trainer. Biyong now reverses position and he is back in mount. Great transitions from both men. Biyong starting to unload some shots as he gets into Trainer’s guard. Biyong stands up and kicks the legs. Swings Trainer’s legs to the side and is now in side control. 10-9 Biyong

Round 3: Both men are very tired after an insane second round. Action has slowed a bit here in the final round. Lazy high kick from Trainer catches air. Trainer whiffs on a right hand. Jab from Biyong. Trainer is spent, and all of his shots are slow. Biyong goes in and lands a left hand and drops Trainer. Hammer fists from guard. Great position for Biyong. Biyolanding shots from the top and Trainer isn’t doing much of anything here. Biyong will steal this round and the fight if Trainer can’t get up. Trainer gets up, on cue. it was a slow round for both men but Biyong gets it. 10-9 Biyong