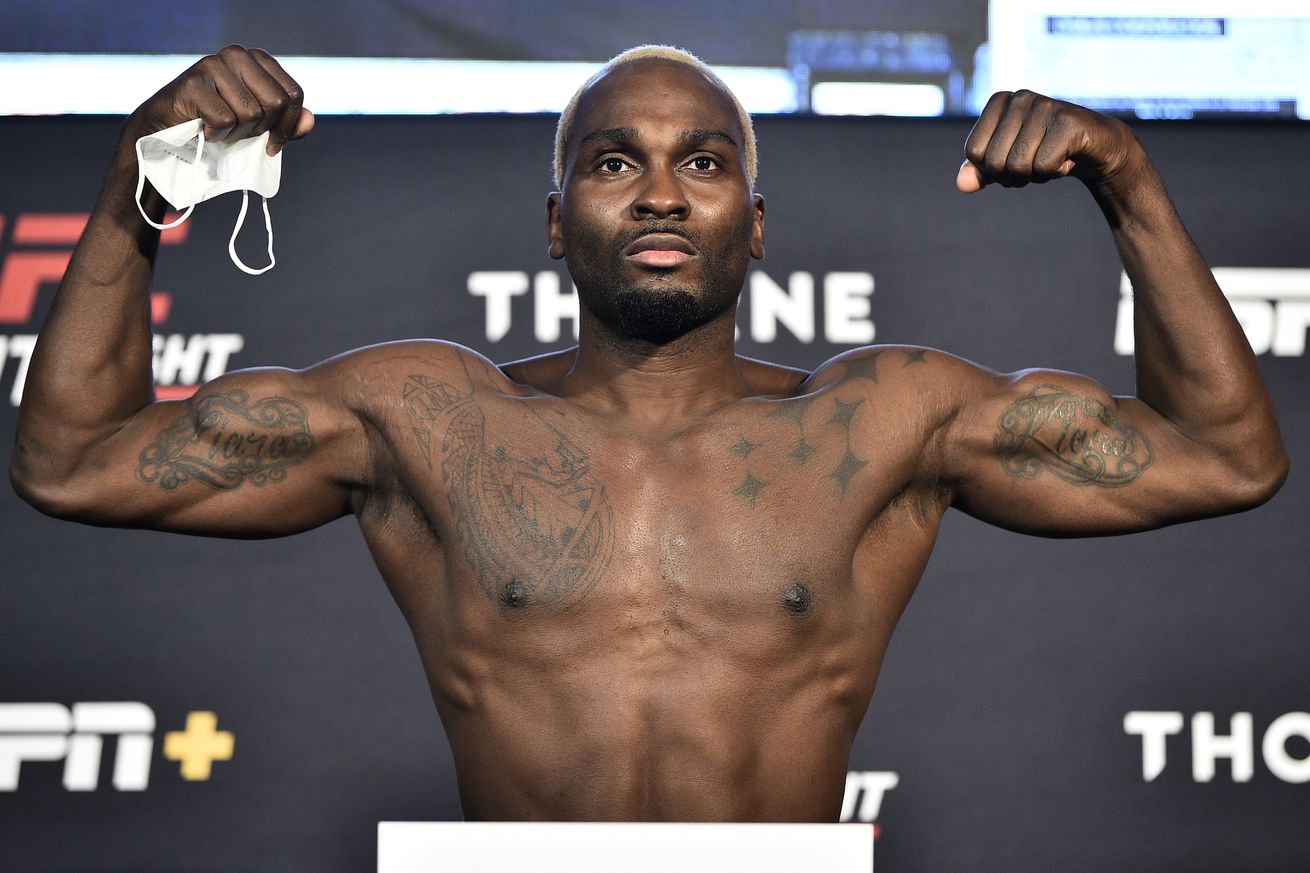 Ultimate Fighting Championship (UFC) is set to kick of an entire month of events in Las Vegas, Nevada, this Saturday night (Aug. 1, 2020), as UFC Vegas 5 is set to go down inside the promotion’s APEX facility. Headlining the event is a Middleweight showdown between Derek Brunson and Edmen Shahbazyan. In the co-main event, Joanne Calderwood takes on Jennifer Maia in women’s Flyweight action.

Edmen Shahbazyan has been hailed by many as the future of the Middleweight division. The 22-year old has only competed four times in the UFC, but he’s opened everyone’s eyes thanks to his dominate ways which have seen him finish more opponents than not (prime example here). His style is fan-friendly, as well, since “The Golden Boy” is super aggressive and prefers to let the action play out on the feet, earning knockouts left and right. The only knock on Shahbazyan is that he hasn’t faced the top competition many feel would give him some trouble. He’ll definitely get that in Brunson tonight.

Brunson was ever-so close to a title shot in 2016 after reeling off five straight wins, including four consecutive first-round knockouts. That was until he ran into Robert Whittaker, who knocked him out to end his streak and steal his shot at the strap. Since then, Brunson has dropped three more high-profile losses to Anderson Silva, Ronaldo Souza and Israel Adesanya, while picking up wins over Lyoto Machida, Dan Kelly, Elias Theodorou and Ian Heinisch, giving many the impression that he simply can’t “win the big fight.” While Shahbazyan isn’t on the same level as those fighters just yet it would still be a great notch on Derek’s belt handing him his first loss and derailing his hype train. By doing so, Brunson will earn his third straight win, putting him perhaps one or two big wins away from finally reaching the promised land.

This card suffered a variety of hiccups along the way, but it’s hard to complain since there isn’t much the promotion can do on short notice during these times. I guess the only thing we can really be upset about is the fact that Brunson vs. Shahbazyan will only be three rounds.

The main event was originally set to feature a women’s Bantamweight bout between Holly Holm and Irene Aldana before it was scratched after Aldana tested positive for COVID-19. As a result, Brunson and Shahbazyan were bumped up to headliner. A fight between Eric Spicely and Markus Perez was scratched after Spicely had trouble making weight. His later replacement, Charles Ontiveros, was ruled ineligible to compete on weigh-in day, forcing the cancellation of the fight. Also, Ray Borg was once again forced out of a fight for undisclosed reasons, allowing Johnny Munoz to step in to face Nate Maness. Timur Valiev’s debut was put on pause after he was forced out of the card for undisclosed reasons. As a result, Vincent Cachero got the call to face Jamall Emmers.

There weren’t any physical injuries to report, but all of the above last-minute changes were more than enough to give matchmakers a headache.

Nathan Maness will bring his 11-1 record to the Octagon for the first time to face Johnny Munoz in Featherweight action after Ray Borg was forced out the matchup a day before the event. That said, Munoz will also be making his UFC debut, though he will be doing it on super-short notice.

Also, Vincent Cachero will be taking his first fight inside the eight-sided cage to face Jamall Emmers after he stepped in to fill the void left behind by Timur Valiev. Cachero does have a 7-2 mark, but after starting off 6-0, he is just 1-2 in his last three outings.

Cody Durden will be making his UFC debut on just six days notice. Durden’s strength is his wrestling, which should work well against Chris Gutierrez. And Cody’s best bet would be to make it a war on the mat, as Gutierrez’s striking is no joke.

To get a more detailed look at all of the “New Blood” click here.

How the ‘Prelims’ Look:

We’ve just discussed three fights going down on the undercard, so let’s focus on the other one. That’s right, there are only four preliminary fights for this event. Frankie Saenz will look to get back on track when he faces Jonathan Martinez in the featured “Prelims” bout. The former King of the Cage flyweight champion was last seen losing to Marlon Vera in March of 2019, which makes his return this Saturday 17 months in the making. Martinez, meanwhile, is coming off a loss to Andre Ewell earlier this year, so he is looking for a big win to turn things around.

Who Needs A Win Badly:

Joanne Calderwood isn’t in any danger of being cut, but she is in danger of losing her title shot. Indeed, “Dr. Kneevil” put her guaranteed title shot against women’s Flyweight champion, Valentina Shevchenko, on the back-burner to face Jennifer Maia at this event. A loss to the jiu-jitsu ace means Calderwood’s title shot goes up in flames, something that doesn't come around more than once for most UFC fighters.

The card took a big hit with the loss of Holm vs Aldana. That said, Brunson vs Shahbazyan should be a barn-burner and will let us know who exactly Edmen is against a middle of the pack contender at 185 pounds. Also, Vicente Luque will be on the hunt for his second straight win when he faces Randy Brown in 170-pound action. Luque was on the cusp of breaking through for a shot at the title before his momentum was halted by Stephen Thompson last November.

Also, an intriguing lightweight scrap between two wild 155-pounders in Lando Vannata and Bobby Green will occupy a spot on the main card. And with good reason, too, as both men know how to bring it night in and night out. These two men are rarely in boring fights, so when you put two combustible components together like that, fireworks tend to happen.

Ed Herman is still going strong after spending the last 16 years employed by UFC. And he is still doing fairly well, as he has won his last two against Patrick Cummins and Khadis Ibragimov. His next challenge will be tonight at UFC Vegas 5 against middleweight defector Gerald Meerschaert

***Fight card, bout order and the amount of matches subject to drastic change because of the various global quarantine restrictions.***

To check out the latest and greatest UFC Vegas 5: “Brunson vs Shahbazyan” news and notes be sure to hit up our comprehensive event archive right here. For even more upcoming UFC events click here.